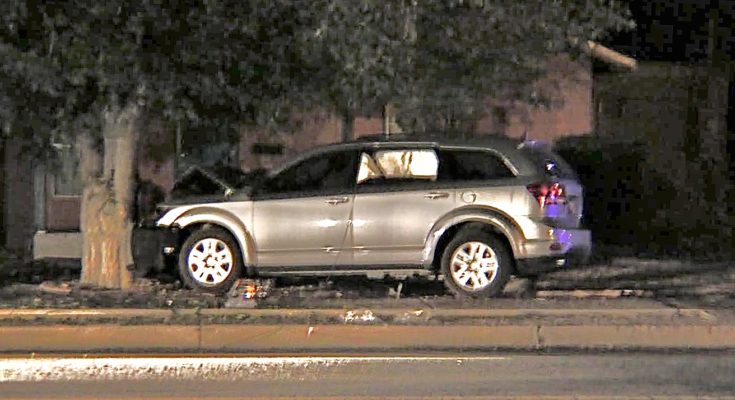 Contributed Photo: A 2018 Dodge Journey comes to rest after striking a tree. The SUV severed utility poles, knocking out power to the town of Thatcher, before striking the tree. The driver, who reportedly took an Ambien sleep-aid prior to driving, was flown to a Tucson hospital for treatment.

THATCHER – A vehicle collision Wednesday evening, Oct. 8 that closed a section of U.S. Highway 70 and knocked out the power to most of the town of Thatcher was possibly caused by the driver’s ingestion of the sleep-aid Ambien, at her doctor’s instruction.

According to Thatcher Police reports, officers were outside the Thatcher Police Department at about 9:20 p.m. when they heard several loud noises and the power went out. An officer reported seeing the sky turn blue east of the department consistent with an electrical transformer blowing.

Officers responded to the area of U.S. Highway 70 (Main Street) and Eighth Avenue and located a silver, 2018 Dodge Journey SUV that had crashed into a tree. Previous to hitting the tree, the vehicle had apparently struck a curb in front of the Cota Apartments while eastbound, which blew out a tire. The SUV then severed two utility poles, one of which held a transformer, before striking the tree and coming to a rest.

After cutting away the airbag, officers contacted the driver, Barbera Darlene Lines, 69, who appeared lethargic and in severe pain.

Despite just being involved in a serious crash, Lines informed the officers that she was on her way to her doctor’s office for a sleep test and that she was instructed to take an Ambien sleep-aid pill 30 minutes prior to the appointment.

Ambien (zolpidem) works quickly and is supposed to be taken right before a patient goes to bed. A person should not attempt to drive a motor vehicle after taking the medication.

Lines was taken by ground ambulance to Mt. Graham Regional Medical Center but was then transferred to a Tucson hospital for further treatment.

According to a witness at the scene, the Journey simply veered off the roadway and no attempt was made to correct its direction.

U.S. Highway 70 was closed between Reay Lane and Stadium Avenue to allow Graham County Electric Cooperative to replace the downed utility poles. The highway was closed until about 2:20 a.m., and full power was restored at about that time as well.

Graham County Sheriff’s Office deputies and an officer with the Pima Police Department assisted with the road closure and Nutcracker Towing removed the vehicle from the scene.