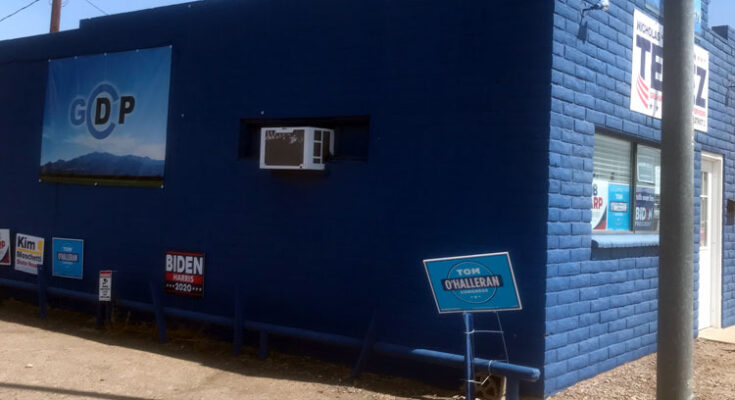 Contributed Photo/Courtesy Patty Cervantez: The Graham County Democratic Party Headquarters was vandalized Monday night when an unknown perpetrator tore down banners from the side of the building. The banners were returned the following morning but have yet to be re-installed.

SAFFORD – The Graham County Democratic Party Headquarters at 816 W. Thatcher Blvd. was vandalized Monday evening when someone tore down banners from the building.

Three staffers were inside the building when the vandalism occurred around 11:15 p.m. at night, and one of them confronted the vandal.

After tearing off the banners, the vandal threw them in the back of the truck he was driving and left the premises. The banners were found Tuesday morning, folded and returned outside the building.

Staffer Jaeden McDonald told the Gila Herald that he was leaving for the night when he heard some music and then came across the man tearing down the banners. McDonald described the perpetrator as being in his 50s or 60s, caucasian, tall, and having grey hair and facial hair. He said the man was very angry and was yelling and cursing at him as he vandalized the building and that he threatened the staffers as well.

“He was filled with anger,” McDonald said. “You could see the anger in his eyes, that’s for sure. He peeled out of here and didn’t even turn on his headlights.”

Graham County Democratic Party Chairman Nicholas Nordgran-Tellez – who is also running for Graham County Board of Supervisors District #3 – said his main concern regarding the incident was for the members who were put in harm’s way for “simply being political and standing up for what you believe. It’s scary, and for myself, I’m not willing to just stand by and let it go.”

Nordgran-Tellez said the Democratic Party will pursue charges and that a police report with the Safford Police Department has been filed. Presently, however, the identity of the vandal is not known.

The Party will hold its regularly-scheduled meeting on Wednesday and has invited a representative of the Safford Police Department to speak to the membership on how to deal with like situations if they occur in the future.

“It’s scary to have individuals in the building and still have this happen,” Nordgran-Tellez said. “That is my bigger concern. Property damage is one thing. It’s not right and it’s not something that we’re going to stand for. But we’re more concerned with our membership. That’s why we’re reaching out to the Safford Police to kind of help us out and give us some guidelines.”

This article was updated at 1:35 p.m. to include statements from a staffer and a description of the alleged vandal.