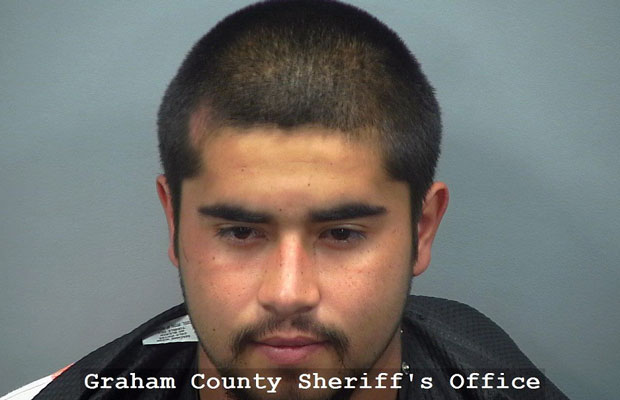 Contributed Photo/Courtesy GCSO: Guy Donham, 20, spent the night in jail and was fined $520 for underage drinking and carrying a concealed firearm while underage.

SAFFORD – A Safford man spent the night in jail and was given a fine of $520 after being involved in an altercation while armed and intoxicated.

Guy Bo Sevin Donham, 20, was arrested at about 11:55 p.m. on Aug. 12 after allegedly drinking a 12 pack of beer before harassing a resident and his son at their home while carrying a concealed firearm.

Officers were initially dispatched to the residence on 7th Street regarding a person wielding a knife. Upon arrival, authorities located Donham and two of his sisters on the residence’s porch. One of the females was holding a stick, and they were yelling at the home.

While ordering the individuals off the porch, the officer noticed Donham reach near his back waistband, causing a silver object to fall to the ground.

Donham was detained in handcuffs and the object was found to be a 7.65mm German handgun with a fully loaded magazine.

According to the resident, Donham and one of his sisters came to his residence multiple times earlier and pounded on his door demanding his son exit for a physical altercation. The resident said the people on his property became aggressive, so he retrieved a kitchen knife in self-defense of his family and home. Both Donham and the first sister showed signs of being intoxicated, according to the report.

Donham allegedly told an officer that he and his sister confronted the occupants of the residence because they were speaking ill of them. He said the occupant pulled a knife on him at the front door, so he went and got his gun and came back to the house.

Donham also allegedly advised of drinking a 12-pack of beer and initially blew a .232 percent alcohol/breath concentration on a portable breath test. Donham was then arrested for underage drinking and having a concealed weapon while underage.

While being booked into the jail, Donham’s breath/alcohol concentration had risen to .31 percent and he had to be medically cleared by staff at Mt. Graham Regional Medical Center before the jail would accept him. He was released the following day.

An official citation was filed on Aug. 14. Donham pleaded guilty on Aug. 17 in Safford Municipal Court on charges of under 21 with liquor in body and carrying a deadly weapon while under 21 and was given a $520 fine.