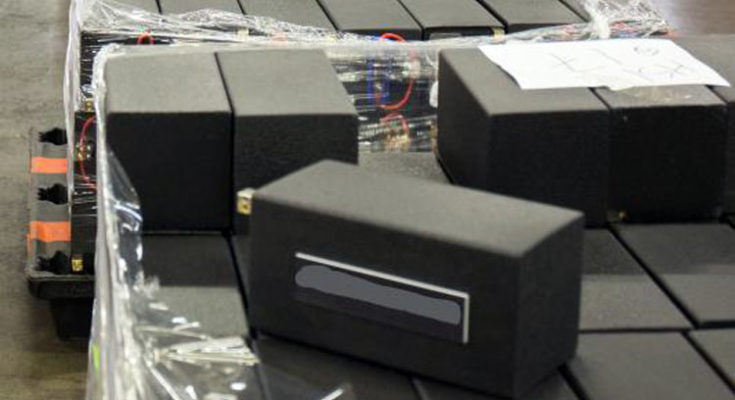 LOS ANGELES – A joint collaborative effort between U.S. Immigration and Customs Enforcement’s (ICE) Homeland Security Investigations (HSI) and members of HSI’s Border Enforcement Security Task Force (BEST), U.S. Customs and Border Protection (CBP) Office of Field Operations, and Australian federal authorities resulted in the seizure of a mixed narcotic load of methamphetamine, cocaine and heroin weighing in a more than 1.7 tons and artfully concealed within a shipment of loudspeakers and destined for Australia.

The drugs, which consisted of three containers targeted for inspection, were seized at the Los Angeles/Long Beach seaport by officers with U.S. Customs and Border Protection (CBP) on Jan. 11.

There’s no question that the criminal organization behind this scheme has been dealt a significant blow, said Joseph Macias, Special Agent-In-Charge for Homeland Security Investigations (HSI) Los Angeles. “Along with our law enforcement partners here and around the world, we continue in a day-to-day battle against the blight of methamphetamine that continues to devastate our communities.  Through a collaborative effort — pooling our information, resources, expertise – we are keeping this dangerous contraband from reaching our streets and potentially saving lives.”

“This is an extraordinary example of the superb and effective collaboration between CBP, HSI and our Australian law enforcement partners in targeting an international high-scale narcotics operation, and the unity of effort in protecting our communities from the irreversible harm of harsh drugs like methamphetamine,” said Carlos C. Martel, CBP Director of Field Operations in Los Angeles. The investigation began when the Australian agents assigned to the Joint Organized Crime Task Force (JOCTF) alerted Homeland Security Investigations special agents about a planned large-scale drug importation by a suspected drug smuggling group operating out of California.

“This is the biggest ever seizure of methamphetamine – more than 1.7 tons – stopped before it had a chance to reach Australian streets,” said AFP National Manager Organized Crime Assistant Commissioner Bruce Hill. “The JOCTF investigation demonstrated the effectiveness of Australian and international authorities working together to stamp out illicit drug importation, and I wish to thank our U.S. counterparts for their expert involvement in this investigation.”