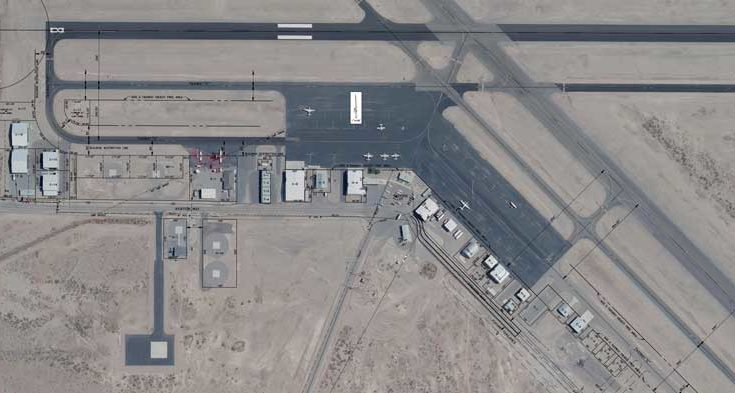 Contributed Photo/Courtesy city of Safford: This aerial shows the overview of the airport. The plane went down short of the runway into a mesa in the desert.

GRAHAM COUNTY – The National Transportation Safety Board is investigating a fatal plane crash that took the life of its sole occupant Tuesday.

A yellow, experimental class plane crashed on approach to the Safford Regional Airport into a mesa just east of Airport Road and north of Sanchez Road. Authorities were dispatched to the scene at approximately 11:56 a.m.

The pilot, Delos “Dee” Echlin, 79, of Tucson was located deceased at the scene. The Pima County Office of Medical Examiner will perform an autopsy to determine the cause of death.

According to Graham County Undersheriff Jeff McCormies, Echlin took off from the Tucson International Airport that morning.

The exact cause of why it crashed is not yet known.

The plane was transported to Phoenix to allow the NTSB to investigate why the plane went down short of the airport.

“We’re pending on the experts,” McCormies said. “The plane is on its way to Phoenix so the NTSB and FAA can look at it. And (with) the medical exam, they will look at all the information and try to determine the cause.”

The family was notified of Echlin’s passing on Tuesday.