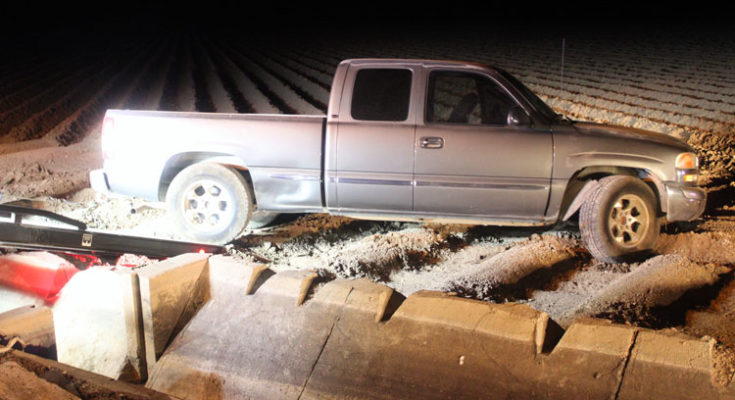 Jon Johnson Photo/Gila Herald: Nutcracker Towing removed a GMC Sierra from a cotton field after the truck left the highway and crashed.

PIMA – A single male occupant was transported to the Mt. Graham Regional Medical Center on Friday night after he drove his truck off the highway and into a cotton field in Pima.

First responders were dispatched at around 10:18 p.m. to U.S. Highway 70 just west of 1200 North (Patterson Mesa) regarding a single vehicle crash.

Upon arrival, officers located a dark-colored GMC Sierra at rest in a cotton field about 25 yards from the highway. Evidence at the scene showed the truck was eastbound when it crossed over both westbound lanes and the northern shoulder before it jumped a roughly three-foot-deep cement irrigation culvert and landed in a cotton field that had plowed furrows. The truck went about 20 – 25 yards in the field over the furrows before coming to rest.

An Arizona Department of Public Safety trooper was joined at the scene by a Pima Police officer and two deputies with the Graham County Sheriff’s Office.

Paramedics from Lifeline Ambulance placed the male driver on a backboard and the officers assisted in carrying him out of the cotton field and over the culvert to the ambulance. The man was then taken to the hospital for further evaluation but did not have any outward signs of injury.

Nutcracker Towing arrived at the scene and expertly winched the vehicle out the same way it went into the field. The tow truck driver said he removed the truck in that fashion in an attempt to minimize any more damage done to the field.

The driver called in the crash to County Dispatch himself and advised that he swerved to miss a dog that was in the highway. The incident is under investigation by the DPS.

This article was updated Monday at 10:40 a.m. to include a statement from the driver.