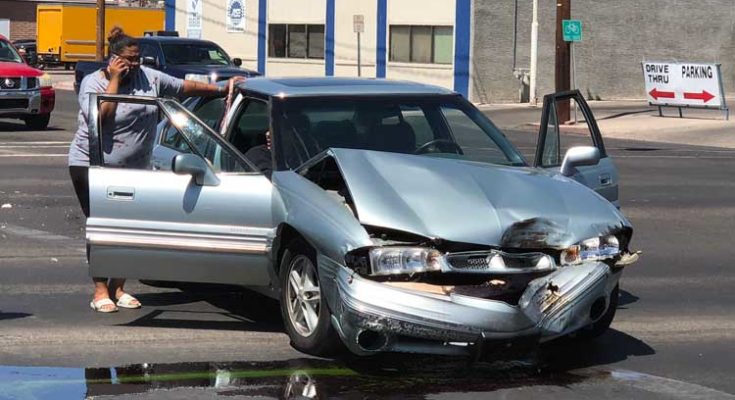 Jon Johnson Photo/Gila Herald: This car was struck by a truck that ran a red light.

SAFFORD – The driver of a white, four-door truck was given a citation for running a red light May 15; an act that caused a collision with a car in the intersection of 8th Avenue and U.S. Highway 70.

The Gila Herald was on scene and live-streamed video of the wrecked vehicles and the situation regarding traffic prior to law enforcement arrival.

According to a Safford Police report, the driver of the truck admitted to running the red light and striking the car. He said he had just exited Mechy’s restaurant located at the northeast corner of the intersection and attempted to make the light but ended up going through after it turned red. He was not injured in the collision.

Two witnesses also stated the truck was at fault for running the light and surveillance footage from a nearby business clearly showed the truck entering the intersection after the light turned red.

The driver of the car reported being injured and was taken by paramedics with Lifeline Ambulance to Mt. Graham Regional Medical Center for treatment.

The driver of the truck was given a citation for running the light and both vehicles were towed from the scene.