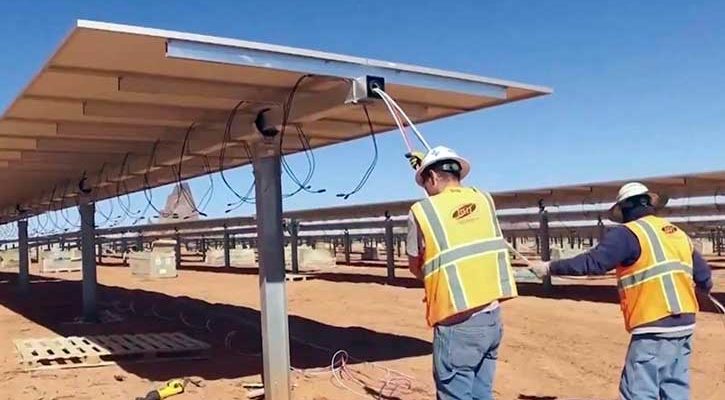 Contributed Photo/Courtesy Navajo Tribal Authority: The Kayenta Solar project created as many as 284 construction jobs as it was being built, in an area with chronically high unemployment. It opened last year and plans are already underway for a second phase, with groundbreaking set for later this month.

KAYENTA – Deenise Becenti remembers watching this summer as a woman in the Navajo Nation who had been waiting more than 20 years to get electricity in her home flipped the switch to turn on the lights for the first time.

“She had a whole lot of happy tears,” said Becenti, the spokeswoman for the Navajo Tribal Utility Authority. “It was a very humble day because you knew that she had been waiting for ‘the day’ for a very long time.”

“The day” was made possible by the Kayenta Solar Project, the first large-scale solar farm on the Navajo Nation and the largest tribally owned renewable power plant in the country. The 27.3-megawatt plant, which went online last summer, now generates enough power for 18,000 homes on Navajo lands.

For years, there had been talk about supplying renewable energy to homes on the Navajo Nation, but that’s all it had been – talk. When NTUA General Manager Walter Haase first proposed that the tribe build its own solar-generating plant, there were skeptics.

When Haase began his job at NTUA in 2008, there were about 18,000 homes without electricity. The utility was in the red. It had never owned its own generating facility. And Haase, who is not a member of the tribe, had to gain the trust of the Navajo people and their government.

“We were in the red, and we just had no direction,” before Haase took over, Becenti said. “The leadership was not there, so he was able to completely turn this enterprise around.”

The idea for Kayenta came together in 2014 and the NTUA was able to break ground two years later.

The project created as many as 284 construction jobs in an area with chronically high unemployment – and facing the possible loss of thousands of jobs with the looming closure of the coal-fired Navajo Generating Station and the nearby Kayenta Mine that keeps it stocked with coal. Haase said that 85 percent of the workforce on the solar project was of Navajo descent.

“We need folks like Walter who are going to be persistent and say that there is no opportunity that is too difficult to deploy this important technology and all the benefits that come with it,” said Tanuj Deora, an official with the Smart Electric Power Alliance.

Deora, whose organization recognized Haase as its Visionary of the Year this summer, said completion of the Kayenta project proves that the Navajo Nation is ready to take on other large-scale renewable energy development.

And Haase said the project has generated more than electricity for the Navajo – by owning and operating the plant, the tribe has gained a new source of revenue.

“It’s significant dollars back to the Navajo Nation government, which needs that to provide self-sustaining … services to their people,” Haase said.

He said the authority and its subsidiary, NTUA Generation Inc., already have plans to expand the Kayenta Solar facility. The authority is scheduled to break ground on Kayenta II on Aug. 23.

Becenti said that the first phase of the solar project has brought families back together on the reservation.

“They had moved off the nation to cities … because they (cities) had electricity,” Becenti said. “So now that the … area is connected, they said, ‘OK,’ and have moved back.”

Becenti nominated Haase for the SEPA award that honors someone who pursues projects “that promote collaborative, innovative and replicable models for change” and that “significantly advance knowledge of or access to distributed energy resources.”

“I already knew I would submit his name for consideration because he’s brought significant progress to the Navajo Nation,” Becenti said of the award, which was presented last month.

There are still challenges. The number of homes off the grid has improved since Haase started, but still stands at roughly 15,000, Becenti said. Although Kayenta could power up to 18,000 homes, getting them connected to the plant is still a challenge because of the vast distances on the remote reservation.

But Becenti looks to the positives.

“We’re meeting the needs of our people … and certainly meeting the definition for which we were created, which was to meet the growing utility demands of the Navajo Nation,” Becenti said.