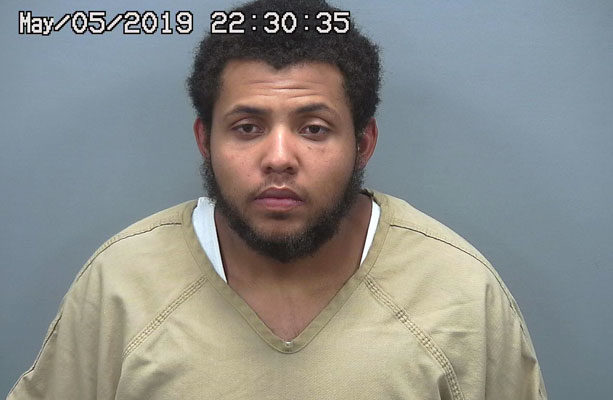 Contributed Photo/Courtesy GCSO: Shawn Michael Goodrum Jr., 22, was arrested and booked into the jail on a plethora of drugs and weapons charges along with theft and a warrant.

SAFFORD – A traffic stop initiated Sunday, May 5, because the officer recognized the suspect as having an active felony warrant for his arrest netted a cache of firearms (at least one stolen but possibly more), stolen credit cards, ammunition, heroin, methamphetamine, drug paraphernalia and a small amount of marijuana.

According to a Safford Police report, an officer recognized Shawn Michael Goodrum Jr., 22, of Pima, driving a white Dodge truck and had knowledge that Goodrum’s driver’s license was suspended and that he had a valid warrant out of the United States District Court for a probation violation. Goodrum was on probation stemming from charges out of the FBI’s Albuquerque, New Mexico office of harboring an escapee/fugitive and receipt of funds stolen from a bank.

Goodrum pulled out behind the officer and as the officer slowed down to allow him to pass Goodrum made an abrupt turn from 1st Avenue onto 11th Street. The officer then accelerated and turned onto 9th Street, locating Goodrum southbound on Central. Goodrum made it to 8th Avenue and 13th Street and had parked before the officer caught up to him.

At that time, the officer informed Goodrum of the warrant and advised him to exit the truck. Goodrum informed the officer that he had a firearm on him and the officer removed a .45 caliber Sig Sauer handgun loaded with nine bullets from Goodrum’s waistband. Goodrum said someone had left the gun in his truck and he put it in his waistband because he didn’t want it sitting under his seat.

A cursory search of the truck yielded two baggies of meth and a baggie with numerous unused syringes. The officer then asked Goodrum about a locked toolbox and the suspect allegedly advised that the officer would “find all kinds of (expletive deleted) inside.

After Goodrum informed the officer where the key was located, a search of the toolbox yield five firearms, a black, Highpoint 9-mm handgun that came back as stolen, a .357 Taurus revolver, a sawed-off shotgun with its serial number removed and appeared shorter than the law allows, a Savage .300 rifle, a .22-caliber Ruger Arms rifle with the serial number grounded off, and a 12-gauge shotgun.

The officer also located a total of four baggies of meth that came to a total of 3.6 grams, a USB box with 14.4 grams of heroin in a sandwich baggie, a digital scale with brown residue, a loaded meth pipe, a small amount of marijuana, two water pipes with meth residue, and multiple ammunition magazines for the various weapons and several unspent rounds.

The officer also located a wallet with credit cards belonging to a woman who was the victim of a car burglary the evening of April 27, after attending a gymnastics performance at the David M. Player Center for the Arts. In that case, the woman returned to her white, Chevy Malibu which was parked on 14th Avenue and saw her window had been smashed and her purse, which contained her wallet and credit cards along with several hundred dollars in cash and checks, was stolen.

Goodrum, who is a prohibited possessor of weapons, denied ownership of all of the weapons and drugs found in his possession and in his truck. He also advised that he had found the wallet and credit cards on the ground in Thatcher.