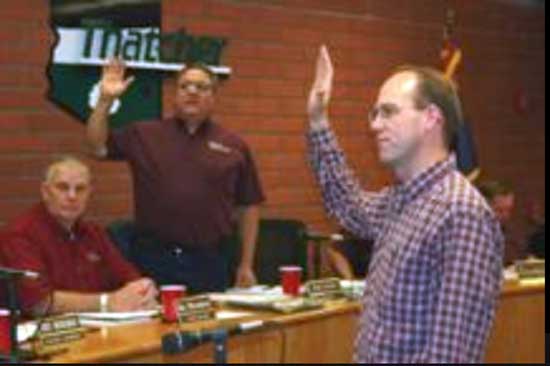 Jon Johnson File Photo/Gila Herald: Thatcher Town Council member Wayne Griffin takes the oath of office in December 2008. Griffin resigned from his seat in March and the town is accepting letters of interest from people who wish to fill his term.

THATCHER – Those interested in filling the remaining two-years of former Thatcher Town Council member Wayne Griffin’s term need to reply to the town by closing time on Tuesday, April 10.

Griffin, who was sworn in nearly a decade ago in December 2008, resigned from his council seat at the town of Thatcher’s meeting in March.

“He (Griffin) did a good job,” Thatcher Fire Chief Mike Payne said. “He was real concerned with the issues of the town.”

Those interested in filling the term need to have a letter of interest with qualifications submitted to the Thatcher Town Clerk’s Office by Tuesday, April 10.