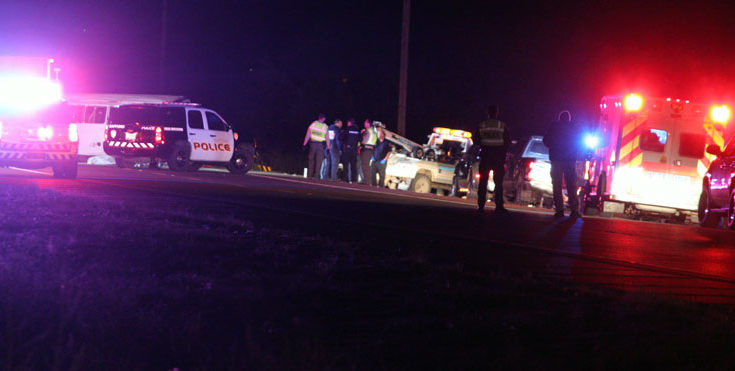 According to a statement from the Arizona Department of Public Safety, the eastbound van crossed into the westbound lane and subsequently rolled. The van was carrying seven area high school students and one EAC student and was driven by an adult male.

At about 10:01 p.m., Graham County Dispatch alerted first responders to the scene of the rollover near milepost 327, which is about one mile west of the Pima town limits.

According to a preliminary report from the Arizona Department of Public Safety, three students were ejected from the vehicle and were declared deceased at the scene, while another was airlifted initially to Mt. Graham Regional Medical Center (MGRMC). Ground ambulances transported the driver and four other students to the hospital for treatment as well. The driver and the five other students received non-life threatening injuries.

A truck cruise for Mason, Kade, and Emmett has been organized to take place today, Saturday, Feb. 22, from the Pima High School to Meg’s Place in Fort Thomas. The cruise is expected to start at 4 p.m., with Mason’s dad, Richie Gann, leading the convoy in Mason’s truck. Gann’s family lives in Fort Thomas but the children attend Pima schools.

The cause of the collision is still under investigation, but impairment does not appear to be a factor, according to the statement from DPS.

“The Eastern Arizona College (EAC) campus community mourns the tragic loss of three Gila Institute For Technology (GIFT) students and those injured in a rollover accident last night. We join the entire Gila Valley community in prayer for the families and friends of these students and send our heartfelt condolences to them.

The health and welfare of our students, faculty, and staff are a priority to EAC. At this time, the cause of this incident is still under investigation and EAC is working with the Arizona Department of Public Safety.

We know this news is difficult to process and that it affects many members of our community. Anyone in need of immediate support is encouraged to contact EAC’s Counseling Department at (928) 651-2889. A 24-hour crisis hotline is also available at 1-866-495-6735. Additional resources will be available at area high schools.

EAC will continue to coordinate with the Arizona Department of Public Safety and local agencies and release information as it becomes available.”

This post was last updated at 3:25 p.m. to include the names of the deceased.