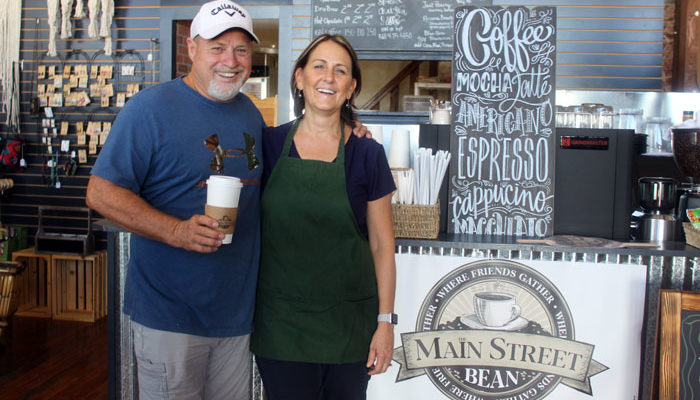 SAFFORD – There’s one thing in common for every customer who receives a beverage from The Main Street Bean; they all leave with a smile on their face.

The Main Street Bean is the latest addition to Ginaveve’s Market Place in Downtown Safford at 401 W. Main Street. Owners John and Jenny Howard purchased the building in 2012 and after about a year of renovation opened as a gift and home decor shop in September 2013.

In August 2014, the store found its niche when it added its gourmet balsamic and oil selections.

“It (the balsamic and oils) saved us,” said co-owner Jenny Howard. “It really did.”

While the balsamic selections and oils already complimented the shop’s business by utilizing them in gift baskets, Jenny had even more ideas for the shop and started its salandwich bar in June 2017.

“Part of the idea behind it was to get people to try the oils and balsamics more,” Jenny said. “If they came in and made a salad and made their own dressings out of whatever they wanted, then they could experiment a little bit more.”

Now the store’s latest addition, The Main Street Bean, serves customers looking for that specialty coffee or non-coffee brew and opens the business to a new breakfast crowd as well with its breakfast paninis and Cin-ini, which is a fresh-baked cinnamon roll slathered with butter olive oil and pressed on the store’s panini press. The Main Street Bean is open Monday – Saturday, 6 a.m. – 6 p.m.

To start the coffee house, one needs to find the perfect bean with which to brew. After a year of pondering and a selection process from several roasters, Jenny chose Summer Moon beans from Wood-Fired Coffee of Austin, Texas. As the name entails, the company roasts its beans, which it stocks from Central and South America, Africa, and Indonesia depending on the type of bean, in its custom-built brick hearth over an oak fire. The beans are also available for purchase at The Main Street Bean for home brewing.

Jenny said the story behind Wood-Fired Coffee and how they came to be in existence, along with the coincidence that the owner and operators originally came from Safford as well intrigued her, but it was the coffee itself that sealed the deal.

“When I got my sample of coffee and made the coffee, that was what sold me was the actual quality and the taste of the coffee,” Jenny said. “It’s amazing.”

The Main Street Bean also offers a variety of non-coffee drinks and, as this reporter can attest, they are just as amazing as well.

Other drinks offered include a selection of frappes (which can have a shot of espresso added to them if desired), hot chocolate, real fruit smoothies made with whole fruit, and a selection of teas, including an herbal tea called Olive Leaf Tea to come in the next few weeks. That tea comes from the same groves where Ginaveve’s gets its ultra-premium extra virgin olive oil.

With the new business, Ginaveve’s has grown to eight floor employees, not including Jenny, who does the books, and John, who is a Jack-of-all-trades at the shop. Two of the Howards’ daughters work at the shop and all have been trained as baristas to operate at The Main Street Bean because, as Jenny puts it, making good coffee is definitely a learned process.

“To pour a shot of coffee is an art,” Jenny said. “You have to get it just right . . . To actually prepare a puck and level it and press it by hand, that means a lot to the quality of the shot you’re going to pour. It’s an art. A shot is made up of three layers, and if you don’t get that right when you’re building that puck, then one of the layers is going to be deficient and throw the quality off and throw the taste off.”

While the products sell themselves because they are of such high quality, Ginaveve’s Marketplace and The Main Street Bean strive to also give the best customer service in town.

“Service is number one here,” Jenny said. “It’s hard to find good service anymore, so giving service to the community is number one. It’s what we’re here for.”

Jenny said she was extremely happy with the reception The Main Street Bean has received and thanked all her customers and the community for making the new venture a success.

“I appreciate the community supporting us,” Jenny said. “We wouldn’t be here if it wasn’t for the people that come in the door, so I’m doing everything possible to keep people coming back. That’s my number-one priority.”