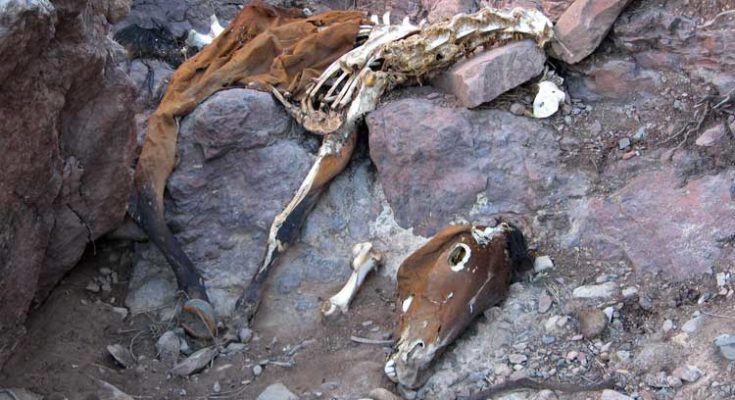 CLIFTON – The bones are all gone. The U.S. Forest Service (USFS) surreptitiously cleaned up the evidence of the shameful debacle that occurred in the Clifton Ranger District during the summer of 2016. Dereliction of duty killed the two USFS horses, Diesel and Snip, and the mule, Little Bit, just as surely as the Arizona summer sun and no water for four weeks. This might seem like old news but not in light of new information.

Freedom of Information Act (FOIA) requests for USFS disciplinary action reports have recently shown a complete breakdown in consistency with USFS protocol on the Apache-Sitgreaves National Forest (A-SNF). The “misconduct” notices of the USFS employees responsible for the cruel deaths of the three equines were listed in the reports this way: “Failed to provide proper oversight of government livestock”. No mention of them dying.

At the time, Carol Telles was the ranger and Allen Graves and Tyler McCafferty were the range division employees. All had responsibility for the safety and welfare of the livestock. The “Corrective Action” printed in the USFS reports list one “Letter of Reprimand” and two actions of “Suspension (of) 14 Days or Less”. Which translates to a slap on the wrist and a vacation of maybe one or two days, who knows? The USFS is less than transparent about the disaster.

What is important is that about a year later, in USFS Region 6, which includes the states of Oregon and Washington (as opposed to Region 3 which covers Arizona and New Mexico), another USFS employee was disciplined for animal abuse or cruelty. In the internal report provided through the FOIA request process, it lists the “Unacceptable Conduct” thusly: “Employee hit mules with ropes and tools”. The “Corrective Action” was “Termination”. Which only seems appropriate.

So, on the A-SNF, supervised by career federal employee Steve Best, one or more of his workers may actually kill not one, not two, but three service animals provided by taxpayer dollars and not worry about it. Not only that, but they may continue in a similar capacity with the USFS, have livestock under their purview, and absolutely no reason why they won’t let it happen again. Yet elsewhere in the USFS, just hitting a service animal with a rope or tools is immediate grounds for termination. There is obviously something radically askew here on the A-SNF.

In addition to the internal agency information provided through FOIA is the “Guide for Disciplinary Penalties” put out by the U.S. Department of Agriculture (USDA), which oversees the USFS. This may be found on the Internet. It states that this guide provides “a framework to assure consistent application of disciplinary penalties throughout the Department”. Supervisor Steve Best of the A-SNF doesn’t seem to have followed his own agency’s protocol properly.

Just as disturbing, under these same USDA disciplinary guidelines, is Section 3, subsection “c”. This reads: “Off-duty conduct which adversely affects the employee’s job performance or trustworthiness, or adversely affects the ability of the Agency to accomplish its mission” is penalized for the first offense by anything from a “Letter of Reprimand to Removal”. The second such offense demands “Removal”.

I have the audio CD of the Greenlee County Court proceedings of both Tyler McCafferty and Allen Graves when they were finally charged with nine counts each of animal abuse and cruelty and had their initial court appearances. In that recording, Justice of the Peace Grace Nabor admonished both men that while out on their own recognizance they shouldn’t break any local, state, or federal laws. That warning was ignored almost immediately by Graves.

He and his Tucson lawyer, Sean Chapman, filed public court papers demanding the dismissal of the case from state court to the federal court in Tucson. The basis for this was that Graves claimed to be a USFS federal law enforcement officer (LEO) and that the horses and mule had died while he was pursuing his usual federal employment duties and was therefore immune to any type of prosecution in the Greenlee County court system.

This blatant falsehood (Graves is not and never has been a federal LEO) was disregarded by the Greenlee County Attorney, Jeremy Ford, and he dismissed not only Graves but also McCafferty’s cases to federal court in Tucson. Sean Chapman, the attorney currently defending the Border Patrol agent who shot (10 times) and killed a 16-year-old Mexican boy through the border fence back in 2012, hijacked the cases before they could even be considered in that Tucson court.

Steve Best, the supervisor of the A-SNF and the USFS Regional office in Albuquerque, New Mexico, has been made aware of such “trustworthiness” of one of his employees but, once again, has chosen to avoid following the agency’s own rules and regulations. Maybe PBS needs to expand its current investigation of USFS sexual abuse and harassment into other areas of malfeasance right here in our backyard.

Dexter K. Oliver is a freelance writer and wildlife consultant who lives in Duncan, Arizona.