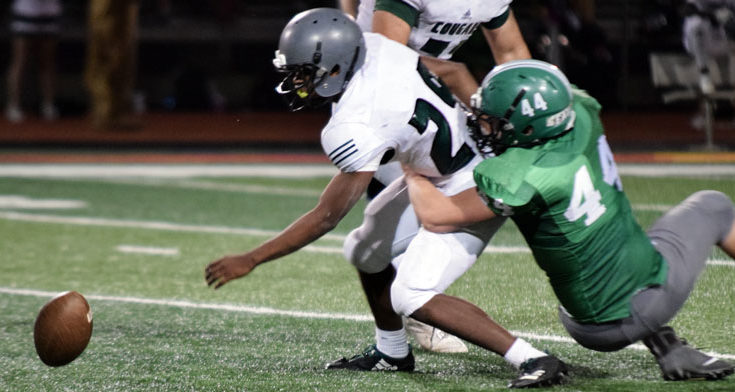 SCOTTSDALE – The No. 1 Thatcher Eagles will square off against the No. 3 Round Valley Elks at Campo Verde High School on Friday, Nov. 23, starting at 3 p.m.

Thatcher (5-0 region, 10-0 conference, 13-0 overall) will look to cap off its perfect unbeaten season with its third straight 2A State Championship.

The Eagles stumbled out of the gate in their semifinal game against the No. 5 Phoenix Christian Cougars (6-0 region, 8-2 conference, 10-3 overall), but the Cougars turned the ball over six times after the first quarter, and the Eagles scored 35 unanswered points to win, 35-7.

The shoe was on the other foot in the first quarter, as Thatcher’s first two possessions ended with quarterback Jack Kortsen losing the ball on an interception and fumble, respectively.

The fumble set the Cougars up in business at the Eagles’ 20-yard line, and running back Malik Taylor quickly took it to the 1 on the first play after the turnover. Taylor then drove it in for the 1-yard TD and the early 7-0 lead for Phoenix Christian with 3:32 left in the first quarter.

The score seemed to wake up the Eagles, and Riley Morris returned the subsequent kickoff 43 yards to the Cougars’ 37-yard line.

On the ensuing drive, Brock Jones had a big play for 5 yards on a 4th-and-5, and Trevan Clark finished the drive with an 11-yard TD run to tie the game up at 7-7.

Then it really started to fall apart for the Cougars. Kortsen redeemed himself for his own interception by turning the tables on quarterback Mark Encinas by deflecting a pass and then intercepting it while splayed out on the turf.

Thatcher was unable to take advantage of that turnover, but on an Eagle punt the Cougar receiver was unable to handle the kick and Conner Russell recovered the fumble for Thatcher at the Phoenix Christian 26-yard line. A block in the back by Phoenix Christian during the kick moved the ball to the 16. Two plays later, Morris burst into the end zone on a 4-yard jaunt to put Thatcher up 14-7.

On the Cougars’ ensuing possession, Ben Shumway broke through and blocked a punt attempt. Shumway recovered the ball and set Thatcher up with another short field at the Phoenix Christian 32-yard line.

Kortsen – who finished with 166 yards rushing and two TDs – scored his first touchdown of the night on a 26-yard run to capitalize off the turnover and put the Eagles up 21-7 heading toward halftime. A late Cougars push as the half expired was thwarted when Shumway burst through the line and took down Taylor for a 2-yard loss on 4th-and-inches.

Thatcher came out flat in the third quarter and punted after a 3-and-out. Phoenix Christian was looking to score, but just as they got into the red zone Collin Thompson forced a fumble that was recovered by Thatcher to stop the drive.

The Eagles couldn’t do anything with the ball and were forced to punt, but the field position had been changed. That didn’t matter to Cougars’ running back Man-Man Freeman, who took off on a 61-yard gain to bring the Cougars right back to the red zone. Freeman would finish with 128 yards on just 12 carries.

The Cougars’ scoring threat was ended, however, when, on 4th-and-19 at the 31-yard line, Quinton Turley intercepted Encinas’ deep pass at the 10-yard line and returned it to the Thatcher 40.

Later in the fourth quarter, Kortsen busted loose for a 52-yard TD to put Thatcher up 28-7 with just 6:45 left in the game.

With time running out, the Cougars looked to dig into Thatcher’s lead, but another fumble gave Thatcher another short field as Thompson recovered the ball at the 32.

Brock Jones then ran it to the 16, and two plays later finished the scoring on the night with an 11-yard TD.

Thatcher now moves on to face the Round Valley Elks, who blew out No. 7 St. Johns 44-12. It will be a rubber match for Round Valley, who will look to avenge its 42-3 loss to Thatcher during the regular season in the normally comfy confines of the Eagar dome Oct. 19.