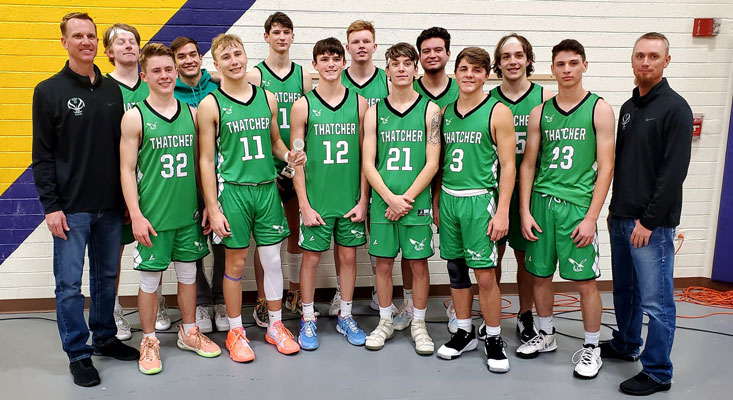 “It was fun,” said second-year head coach Kyle Hull. “We had a good time and some good competition.”

Thatcher’s only loss was in the quarterfinals to the eventual tournament champion, the Marana Tigers, 59-71. The Tigers took the tournament with a win over 3A ALA-Gilbert North, 76-64.

After an opening-round win over 2A Valley (Sanders) 64-30, Thatcher defeated 5A Gila Ridge 80-78 in a triple-overtime thriller. Gila Ridge finished the tournament in fourth place after falling to host school 3A Blue Ridge 39-56.

In the Gila Ridge game, Brandon Napier hit a halfcourt shot to send it to overtime and finished with a team-high 21 points. However, Bradley Curtis fouled out in the fourth, and both Napier and Hudson Griffin fouled out in overtime.

“I was more impressed with the way we finished it with who we had in the game,” Hull said. “It was good for some of the younger kids. For the guys who normally take control (like) Brandon, somebody else had to do it. We got some big minutes out of Christian Carter (10 points) and he kind of had to finish it out being a leader.”

On day two, the Eagles defeated 4A Walden Grove 73-42 to set up a showdown with Marana in the quarterfinals.

After a tight first few minutes, the teams were pretty evenly matched. However, Marana pulled away late in the quarter to double up the Eagles after one quarter, 21-10.

“They (Marana) are a good, good team,” Hull said. “They were definitely the number one team . . . I really felt like Marana was the dominant team and we were probably second – Gila Ridge being third and then ALA was in there for fourth and Chinle could have even been in there. Overall, I think it was a good tournament. The competition was good. The atmosphere was good and it was just fun to be a part of.”

Marana extended its lead to 13 points but the Eagles fought back in the second quarter and got it down to a single possession, 35-32 after Bradley Curtis hit on a step-through move off glass. Curtis finished with a double-double at 23 points and 11 rebounds to lead Thatcher.

Coach Hull said he took it as a slight that Curtis was left off the all-tournament team. His last three games against Marana, Arizona College Preparatory, and Chinle saw him go for 23 points and 11 rebounds, 21 points, and 11 rebounds, and 22 points and 8 rebounds, respectively.

The teams stayed even through five minutes of the third quarter and then Brandon Napier drove through three Tigers to hit a layup to make it a one-point game, 40-39, with 3:16 left in the third. Napier would be voted to the All-Tournament Team as Thatcher’s lone representative.

“His (Brandon) poise and his control of the game and his basketball IQ is really high,” Hull said. “I guess that is what set him over the edge.”

Marana then went on a run and was up 51-41 with 16 seconds left when Napier hit another layup. Marana brought the ball back down the court and got a foul call with 3.5 seconds left. Marana couldn’t inbound the ball and Thatcher took over. The Eagles got the ball into T.J. Reed, who did his best Stephen Curry imitation and nailed a 30-foot-plus 3-pointer at the buzzer to make it a five-point game, 51-46.

The Tigers managed to stave off the Eagles, however and went on to win 71-59.

Thatcher beat 2A Arizona College Preparatory 54-44 on Dec. 30 and finished its tournament with a 69-47 victory over Chinle.

“That was kind of really my first tournament other than the (EAC) Holiday Tournament which we don’t travel (for),” Hull said. “And it’s good to see some teams from our conference and those 5A schools are always fun to play.”

Thatcher will next travel to face Pima on Tuesday, Jan. 4, before hosting Snowflake on Friday, Jan. 7, and Show Low on Saturday, Jan. 8. The Eagles will then travel to American Leadership Academy – Ironwood on Monday, Jan. 10 – all games start at 7 p.m.

The 2A Morenci Wildcats ended up splitting the tournament evenly with a 3-3 record over the three-day event.

Morenci opened the tournament with a 38-62 loss to 3A ALA Gilbert-North and a 73-72 victory over 4A Walden Grove on day one.

On day three, Morenci fell to 3A Show Low 33-61 and then defeated Ganado again 61-31 to finish its tournament.