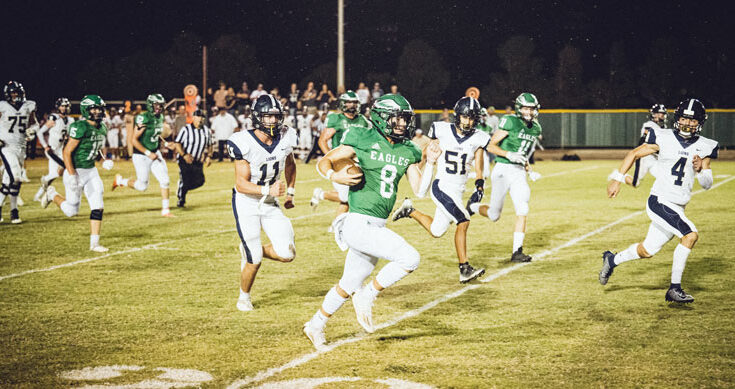 Photo By Steve Carter: Brandon Napier (8) and the Thatcher Eagles ran away from the Pusch Ridge Christian Academy Lions 28-14 on Saturday night. Napier led the way with three TDs.

Eagles perched atop 3A South

THATCHER – The Pusch Ridge Christian Academy Lions came into John Mickelson Field on Saturday unbeaten and atop the 3A South, they left with their first loss and tumbled into third.

Lightning caused the Thatcher versus Pusch Ridge Christian Academy football game to pause for a day at halftime on Friday. The Eagles (2-0 region, 5-0 overall) were up 14-7 at the time of the postponement and finished the job Saturday night and defeated the Lions (1-1 region, 5-1 overall) 28-14.

After a couple of big-time breakaway TDs by Thatcher quarterback Brandon Napier gave Thatcher a two-touchdown cushion in the third quarter, the Eagles turned a back-in-forth game into a victory through ball control, defense, and time of possession.

They did it to such mastery that even though they turned the ball over twice on apparent score-ending drives in the Red Zone that it didn’t cost them anything. It wasn’t smooth sailing the whole game for the Eagles, and I’m not talking about the weather delay.

Two mainstays for the team throughout the game were its punishing defense and its dominating offensive line play, which combined with running backs who bounce off first contact to fall forward for at least three yards at a clip, gave Thatcher tremendous short-yardage second and third down situations, which led to big plays.

One of the team’s biggest players of the game was quarterback/defensive back Brandon Napier, who finished with nearly 200 yards rushing on the night and three touchdowns. He also had several pass deflections on defense.

Napier scored on runs of 67, 35, and 53 yards on quarterback scrambles or runs.

“It’s just my line doing their jobs, all glory to them,” Napier said. “Obviously, we can’t do anything in the backfield without them and I know they trust me. If I don’t see something open the coaches tell me ‘use your athleticism (and) try to create something.’ Luckily tonight, the stars aligned and I was able to just find my way into the end zone.”

“They’re very fast and they’re very good on the edges – great hands.,” coach Jones said. “So, our job was to just get it out of his hands as quick as possible. So, we were sending people and making him make choices real fast.”

Bubba converted on a big 3rd and 7 when he hit Butler on a screen that turned into a 23-yard gain. Bubba then extended the play by dancing in the backfield and hitting Butler to set up a 1st and goal. Brysen Barrios finished the drive with the rushing TD and PRCA had the initial lead, 7-0. It wouldn’t last long.

Kody Bingham nearly took the ensuing kickoff back to the house but was stopped just short of the 20 after a 74-yard return.

It only took a few plays after that for Ayden Bingham to take it in from the 4 and the teams were knotted up at 7 apiece.

Thatcher’s defense then asserted itself against PRCA and forced three punts, a missed field goal, and an interception on the Lions’ next five possessions of the first half. The interception by Cody Jones was something to behold. Be sure to check out the highlight video to see it.

Offensively, Thatcher had a big run from Napier (67 yards) to give them a 14-7 lead, but couldn’t muster anything after that and finished with five straight punts to go into halftime.

The lightning show then commenced and after consecutive weather delays, athletic directors from both schools agreed to resume the second half on Saturday at 7 p.m.

The Eagles must have eaten their Wheaties on Saturday morning because they came out with power and purpose.  The Lions’ initial kick went out of bounds and most coaches are happy to take the penalty and start their drives at the 35-yard line. Well, Dan Jones isn’t always like most coaches and instead, he made PRCA kick again.

This time the kick was deep, and I admit I second-guessed the decision as Kody Bingham snagged it at the Eagles’ own 10. But Bingham sped around the left side and made it to near mid-field.

Cody Jones then exploded on the next play and stiff-armed a defender on his way to a 53-yard score. The only problem is that holding was called and it was brought back.

No problem, a few plays later Napier went for his second TD of the game and Thatcher was up 21-7.

The Lions showed their moxie and came right back when Bubba hit Tyler who juggled and then gathered the pass on 3rd and 9 to go 46 yards for the score to make it 21-14.

Thatcher came right back with Napier’s third score of the night and its defense forced three straight punts.

The offense went into control mode with the lead and had two long, sustaining drives, that however failed to end with points. The Lions’ defense stepped up both times, stopping the Eagles on a 4th and 4 on one drive and then getting a sack/fumble on a designed run.

“You get those couple touchdowns you start bleeding that thing and make them impatient,” coach Jones said. “That’s kind of what we can do with our big boys up front.”

The Lions continued to move the ball down the field late in the fourth quarter, but their last attempts ended with a sack and incomplete pass.

The Eagles are now in a tie with Tucson Sabino (2-0 region, 5-0 overall) for first place in the 3A South. Sabino will visit Pusch Ridge on Friday, Sept. 30, starting at 7 p.m.

“(They’re a) great team; great coached team,” Napier said about PRCA. “I talked to a few of their guys. They’re great athletes and they are going to be another team to see down the road. My team played amazingly. Hopefully, we can keep that up.”

The Pima Roughriders had their game with Willcox rescheduled to Saturday due to inclement weather on Friday night. The Roughriders (4-1 overall) defeated the Cowboys 27-14. Pima will next host San Carlos on Friday, Sept. 30, starting at 7 p.m.

In 2A, Morenci remained unbeaten and destroyed Tombstone 56-0 for the Wildcats’ third shutout of the year. Morenci will next host Globe on Friday, Sept. 30, starting at 7 p.m.