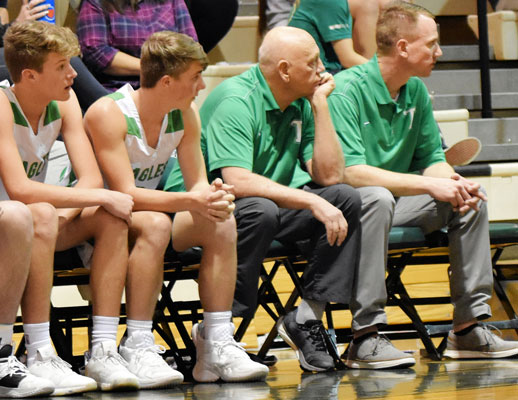 THATCHER – The Thatcher Eagles didn’t have to look far for their next boys basketball head coach; he was already on the bench as an assistant.

Thatcher local Kyle Hull was approved as the next head coach for the high school’s boys basketball team at a school board meeting last Thursday night.

He will be Thatcher’s third head boys basketball coach in four years and will take over for Robby Martindell, who did not have his contract renewed after his initial season. Martindell replaced head coach Chris Riehemann, who lasted just the 2018/19 season.

“I was grateful for the opportunity Robby gave me to be his assistant,” Hull said. “Unfortunate circumstances there, but I wasn’t ready to be done, so here we are.”

Hull, who won a state championship at Thatcher in 2A as a player in 1995, said he looks forward to the new challenge of competing in the 3A conference.

“I’m excited to move to 3A and do something different,” Hull said. “I came through the 2A and played the same old people, so this is new all the way around – new division, new conference, new travel, new gyms, new everything – so, I’m excited for that. Overall, I’m just excited to be a part of the program. I love teaching the kids and it just kind of transformed into this.”

The Eagles will be in the 3A South Central Region next year along with American Leadership Academy – Ironwood, Florence, Globe, San Tan Foothills, and Coolidge.

Hull, who in addition to being an assistant last year also was the head coach for the junior varsity team, said he is pleased to be able to continue coaching some of the same players he started to develop on the JV team.

“I’m excited not only because I get to be the coach but just for the group of kids because I was involved with them from the year before,” he said. “They’re a good group of kids; they’re young; they’re eager to learn; they’re putting in hard work to be the best.”

Hull said he would like to push the ball and run as often as he can next year, so fans can expect some high-scoring games.