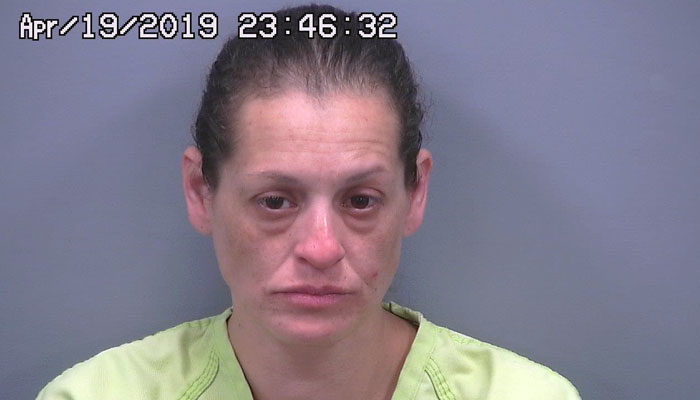 Contributed Photo/Courtesy GCSO: Bobbi Jo Rios, 40, was arrested and booked into the jail on methamphetamine charges.

THATCHER – Patience, investigative instinct, and the inability of an alleged meth dealer to keep up her vehicle’s registration and insurance led to a bust and meth seizure for the Thatcher Police Department on Friday, April 19.

According to a Thatcher Police report, an officer was on stationary patrol in the 3600 block of Main Street at about 7:30 p.m. when he noticed a white station wagon leave the Twin Palms Trailer Park. As the vehicle began eastbound on Main Street, the officer ran a routine license plate check and learned that both the vehicle’s registration and insurance were expired.

The officer initiated a traffic stop and came upon Rios in the driver’s seat with her 3-year-old child in the front passenger seat and not in a car seat as required. Rios said she had “just left the house real quick to go get tortillas” and that was why the child wasn’t properly restrained. When asked if she had just left her own residence she advised that she had actually just dropped off a friend.

At that time, the officer ran Rios through his computer and learned that her driver’s license was suspended due to failure to pay fines. He then filled out a traffic citation for driving on a suspended license and a child restraint violation and also filled out a warning for having expired registration and canceled insurance.

Upon returning to the vehicle with the citation and warning, the officer noticed Rios’ purse and asked if she would mind if he searched it. After receiving permission, the officer looked through the purse and located a baggie containing 27 grams of meth.

Rios advised the meth was for her own personal use and that she was an addict. She also said she believed there was only about eight or nine grams in the bag.

The officer then advised Rios to call someone to come pick up the child and he began to search the rest of the car. Inside a pink bag, the officer located two more bags of meth with a combined weight of two ounces, as well as a black scale.

The officer also located two cell phones and during his interaction with Rios one of the cell phones received a call from an individual the officer knew to be involved in dealing drugs in Thatcher.

After initially stating the cell phone belonged to her 16-year-old niece, Rios allegedly admitted it was indeed her property.

After Rios’ mother arrived and left with the child, Rios was taken back to the Thatcher Police Department, where she was given a field sobriety test, which she failed. Her blood was then taken for DUI testing purposes.

She was then transported to the jail on the above-listed charges with a possible pending charge of aggravated DUI. The report also stated that the officer would attempt to obtain a search warrant for the cell phone so its contents may be perused.