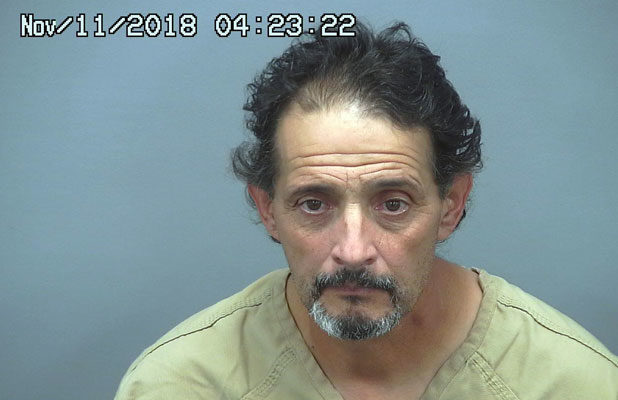 Contributed Photo/Courtesy GCSO: Gilbert Ordonez was booked into the Graham County Jail for possession of meth for sale after being found with about 18.5 grams in various packages.

THATCHER – Suspicious driving and a moving violation led to the arrest of a couple on drug charges in Thatcher in the late evening of Saturday, Nov. 10.

Rebecca Jacqueline Ordonez, 50, was arrested for DUI, possession of a dangerous drug, possession of marijuana, and possession of drug paraphernalia. After agreeing to submit to a blood draw for DUI-testing purposes, Rebecca was released.

According to a Thatcher Police report, an officer was monitoring traffic near the Twin Palms Trailer Park in the 3600 block of Main Street at about 11 p.m. when he noticed a white, 2008 GMC vehicle exit the trailer park and head eastbound on U.S. Highway 70. As the officer followed, the vehicle turned into the parking lot of Denny’s restaurant. The officer drove further down the road but noticed the same vehicle pull out of the parking lot after he was out of sight. The officer then pulled behind the vehicle again, and when the vehicle made a wide right turn southbound onto 20th Avenue and failed to go into the closest lane the officer initiated a traffic stop.

During the stop, the driver, Rebecca, reportedly said she used methamphetamine that morning and then did four hits at about 4:30 p.m. at the Economy Inn where they were currently living. After receiving permission to search the vehicle, the officer located a bag of ashes in Rebecca’s purse that she identified as her dog’s remains. Inside the ashes, the officer located a small packet of what appeared to be meth. Another small packet of meth and two small packets of marijuana were also located in Rebecca’s purse.

The officer continued his search and discovered more meth in various baggies with what appeared to be their weights written on them inside a tool bag. The total amount of meth seized was approximately 18.5 grams. Inside the tool bag, there was also a digital scale, a glass pipe with meth residue as well as a wallet with Gilbert’s identification and a pill bottle with his name on it as well.

After initially saying the tool bag belonged to his “helper” Gilbert admitted it was his bag and said all the drugs, even those found in Rebecca’s purse, belonged to him.

Rebecca advised that the meth belonged to Gilbert but that the marijuana was hers.

Gilbert said he buys meth in Tucson for $160 for an ounce but that he doesn’t sell it and that the weights on the various baggies were there just to remind him how much he had in each baggie. Shortly thereafter, Gilbert allegedly recanted his statement and admitted he is a meth dealer and that the baggies were indeed for sale. He was then taken to the jail and booked on his drug charges while Rebecca was released from custody pending blood test results and charging by the Graham County Attorney’s Office.