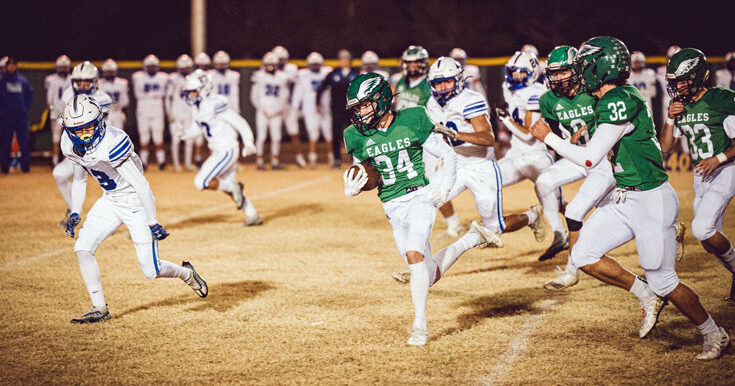 Photo By Steve Carter/Special to the Gila Herald: Kody Bingham takes a kickoff back 90 yards to the house. Bingham and the Eagles defeated the Trojans 56-35 to move into the semifinals on Saturday.

THATCHER – What do you do when you lose your All-Region starting quarterback? If you’re Thatcher pursuing a state title, it’s next man up, baby.

With a tenuous 8-point lead early in the second quarter, Thatcher lost its quarterback when Brandon Napier injured his left leg on a scramble against No. 8 Valley Christian at EAC’s John Mickelson Field on Friday night. Sophomore Brett Jones answered the call and led Thatcher to a 56-35 victory to put the Eagles in the semifinals.

Napier actually got rocked on a defensive play in the first series against the Trojans and did not come out as quarterback for the Eagles for its first series.

Sophomore Brett Jones took the first snap on offense but didn’t last long as Napier was cleared and came in for the second play from scrimmage after Thatcher got a false start penalty. And just like that, boom, Cody Jones busted it up the gut for a 75-yard TD but the play was brought back for a penalty.

The Trojans had success through the air as QB Hunter Heeringa hit his receivers early and often. After getting pushed back for 3rd and 16 after a sack/fumble by Hunter Saline, Heeringa dropped way back and slung a 48-yd TD pass to Ethan Heinrich. The extra point was no good, but Valley Christian was up early 6-0 with 6:17 left in the first quarter – a spot Thatcher hasn’t really seen this season.

Thacher struck right back, however, as Kody Bingham took the ensuing kickoff at the 10 and brought it back 90 yards to the house. And after a Gavin Rogers extra point the Eagles were back in familiar territory up 7-6 and we’ve got a ball game.

Thatcher extended its lead on its next series as Napier faked a handoff to Damian Oriero and instead kept it and zipped 70 yards down the left sideline for the score and Thatcher was up 14-6 with 2:58 left in the first.

In the second, Napier hit Hunter Saline over the middle for a nice 22-yard pickup to move the ball into Trojans’ territory and open back up the run game. Tragedy struck the Eagles shortly after, however, as Napier dropped way back but couldn’t find anyone open. He then scrambled and got hit by multiple defenders. Napier got up and limped to the sideline, throwing his helmet in disgust, and then collapsed due to an apparent injury to his leg. He did not return.

Napier went to the Emergency Room following the game and an X-ray showed no broken bones but he reportedly suffered a deep bone contusion with possible nerve damage, according to coach Jones. There is no timetable set for Napier’s return as of yet, but coaches are holding out hope.

Brett Jones answered the call and had a good run followed by a good read and pitch. Ayden Bingham then did what he does and made multiple Trojans miss on his way to about a 17-yard TD run to put Thatcher up 21-6, with 7:39 left in the half.

Valley Christian stormed right back, however, and they did it through the air. Heeringa let a bomb go deep and as the Thatcher defender fell on the play Eric Miller was all alone to corral the catch for the TD. Heeringa then threw for the 2-point conversion and Thatcher’s lead was down to 21-14 with 6:47 left in the half.

Valley Christian’s goal line defense then stepped up and stopped Thatcher on 4th and 6 from the 9-yard line when Brett Jones was sacked for a loss. Brett then was flagged for an unsportsmanlike penalty to move the ball forward 15 yards in addition to the turnover with 1:50 left in the half.

With the Trojans’ passing game, it seemed that they were built for the 2-minute drill and they did not disappoint. Heeringa nailed a couple of quick-hitters to get close to mid-field and then he took a deep shot to a wide-open Ethan Heinrich, who would have gone in but stumbled which allowed Christian Carter to catch him at the 1-yard line. Heeringa and the Trojans then ran down and snuck it in for the TD to drop Thatcher’s lead to 21-20. The Trojans went for the lead with a 2-point conversion but Caleb Lewis was stopped short on the reception.

With a backup quarterback and only about a minute to play to halftime, you might think coach Jones would play it safe and run the ball – you would think wrong.

Brett Jones came in and slung a deep pass over the middle that was short but Wyatt Nicholas adjusted and collected the long pass. Then with just 55 seconds left in the half, Brett dropped back and dropped an absolute dime to Nicholas, and Nicholas got inside the pylon for the 32-yard score and Thatcher went into the half up 28-20.

Valley loaded up the box in the second half but it didn’t matter and Thatcher continued its momentum with big runs from Ayden Bingham and Cody Jones that propelled the ball downfield. Bingham finished the drive on a 3rd and goal from the 1 and the Eagles got some more cushion up 35-20 with 7:57 left in the third.

Nicholas then caught a ball not thrown by a Thatcher quarterback and got an INT around the 3-yard line to turn the ball back over to Thatcher.

However, a mishandled handoff led to a fumble recovery for the Trojans at Thatcher’s 29, and Valley Christian was back in business.

Then on 4th and 2, Heeringa scrambled to just get the first down at the Eagles’ 18-yard line to extend the possession at the end of the third quarter.

The Trojans then completed the series early in the fourth quarter when on 1st and goal from the 5 Heeringa hit Adam Bradford for the score. Heeringa then hit Jared Jentgen on the 2-point conversion while under duress and don’t look now but here come the Trojans down just one score, 28-35, with 11:16 left in the game.

The Eagles were aided after a first-down pickup when a complaining Valley player was flagged for 15 yards. Thatcher made the most of the gift and did what they do as they ran the clock down and headed downfield behind their offensive line.

Then after smashing the ball up the middle time after time, Brett Jones pulled it and headed around the left end for a big run to give Thatcher a first and goal. Ayden Bingham took it in on the very next play and Thatcher went up 42-28 with 7:48 left in the game.

Thatcher then ran out the rest of the game and finished with a 7-yd QB sneak by Brett Jones to end it 56-35.

No. 2 Morenci defeated No. 7 Tonopah Valley, 52-6. Morenci will next play No. 3 Scottsdale Christian at Westwood High School in Mesa on Saturday, Nov. 19, starting at 6 p.m.