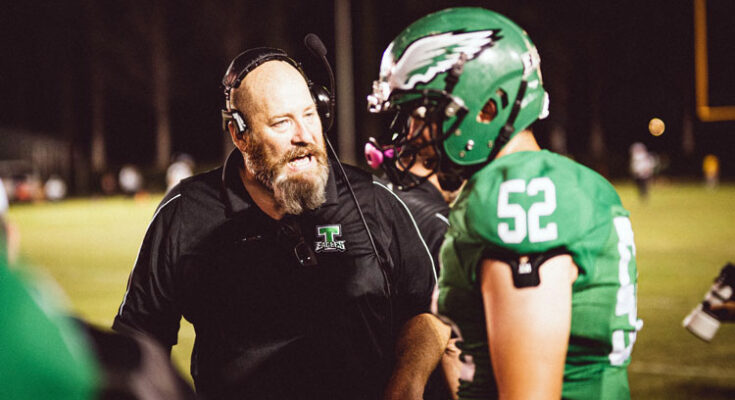 Photo By Steve Carter: Thatcher head coach Dan Jones gives instruction during the recent Pusch Ridge game. Thatcher sits atop the AIA’s initial rankings at number 1 in all of the 3A Conference, while Morenci is number 1 in the 2A Conference.

The two top-ranked teams in the 2A and 3A conferences don’t play each other, however, they did have a scrimmage at John Mickelson Field in August prior to the start of the season.

The Thatcher Eagles (2-0 region, 5-0 overall) have a 23.9705 rating with the next highest rated team, Eastmark (4-1) at 17.0603. Thatcher came from behind to defeat Eastmark 31-30 in a wild game in Thatcher on Aug. 26, on a second-chance, last-second field goal. The Eagles have also defeated third-ranked Pusch Ridge on Saturday and will face fifth-ranked Sabino on Oct. 21.

The Eagles will travel to Tucson on Friday to face the 4A Sahuaro Cougars. Thatcher will then host Benson on Oct. 7 and travel to Coolidge on Oct. 14 before hosting what could end up being the 3A South Regional Championship game against Tucson Sabino on Oct. 21 at Eastern Arizona College – mark your calendars. The Eagles will finish the regular season on the road at Tucson Palo Verde Magnet.

The road to the top of the 2A Salt runs through Morenci and those who wish to pass are going to have to climb the hill to do so.

The Wildcats have had little trouble with opponents this year, with their closest match being a 21-14 victory over the Willcox Cowboys on Sept. 16.

Morenci will next host Globe on Friday, Sept. 30, before heading on a three-game road trip to San Tan Charter (Oct. 7), Miami (Oct. 14), and San Carlos (Oct. 21). Morenci will then finish its regular season at home against Pima.

Pima (4-1) is currently ranked number two and is on the outside looking in, but they are right where they need to be as the teams head into regional play.

The Roughriders’ only loss so far has been to 3A Conference top-ranked Thatcher Eagles 0-19 on Sept. 2.

The Roughriders open region play Friday against San Carlos, and will then visit Globe on Oct. 7. Pima will finish the regular season with two home games against San Tan Charter (Oct. 14) and Miami (Oct. 21) before traveling to Morenci for what could be the 2A Salt Region Championship game on Oct. 28.