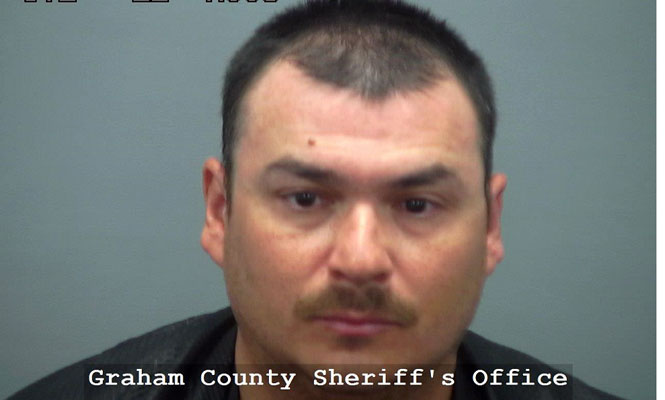 Contributed Photo/Courtesy GCSO: Mathew Pierce, 35, was arrested and booked into the jail on charges of aggravated assault, endangerment, and disorderly conduct after a domestic dispute that was followed up with a police standoff for about an hour.

THATCHER – An armed standoff between a Thatcher man and police ended peacefully Sunday night after authorities managed to convince the suspect to exit his residence and surrender.

Matthew Pierce, 35, was arrested and booked into the Graham County Adult Detention Facility on charges of aggravated assault, endangerment, and disorderly conduct.

According to a news release from Thatcher Police Chief Shaffen Woods, officers were dispatched to a residence in the 1600 block of N. Porter Lane in the Cota Subdivision at about 8:30 p.m. after Pierce had allegedly brandished a firearm during a domestic dispute. Pierce was reportedly viewed by an officer as being armed with a handgun in his garage prior to closing the garage door.

Thatcher officers were joined at the scene by officers from the Safford and Pima police departments and deputies from the Graham County Sheriff’s Office.

After creating a perimeter, officers made several attempts to communicate with Pierce, who then voluntarily surrendered at 9:32 p.m.

“We are thankful for the assistance of all the local law enforcement agencies who helped during this event,” Woods said in his release. “We appreciate the patience and understanding of the residents in the Cota Subdivision who were disturbed by this dangerous situation.”

After surrendering, Pierce was medically cleared and then booked into the jail on his above-listed charges. There were no injuries to the suspect or law enforcement during the standoff.