Jon Johnson File Photo: A Thatcher man who graduated from Safford High School was taken by Border Patrol to begin the deportation process after being pulled over for speeding.

SAFFORD – A traffic stop for speeding turned into the deportation of a local man and escalation into possible charges of escape in the first degree and criminal trespassing on July 25.

According to a Safford Police report, an officer was on patrol at about 8:46 a.m. when he observed a silver, four-door sedan eastbound on U.S. Highway 70 traveling at 65 mph in a 45 mph zone. The officer initiated a traffic stop and the driver identified himself as Christian Badillo, 25, of Thatcher.

Badillo said while he lives in Thatcher and went to school locally, he didn’t have a valid driver’s license because he had not renewed his immigration status.

Badillo is a former Safford High School student who played wide receiver and defensive back on the school’s football team. He graduated in 2013.

According to online court records, he pleaded guilty in August 2018 to facilitation, possession of drug paraphernalia, and DUI-drug in exchange for dropping a possession of marijuana charge. He served about 20 months on probation and was successfully discharged in April 2020.

During the traffic stop, the officer contacted the Border Patrol in Willcox and gave them Badillo’s information. The Border Patrol advised Badillo’s immigration status was not valid and that they would come to get him and start the deportation process. Badillo was then transported to the Safford Police Department to wait for a Border Patrol agent and his vehicle was turned over to a family member.

Upon the arrival of the agent, Badillo was advised he was being detained and would be transported to Tucson to start the deportation process. He was then allowed to use the restroom and change into clothes a friend brought him since he was wearing only gym clothes at the time.

After changing, Badillo was being led to the Border Patrol van when he fled on foot southbound on 10th Avenue and then into an alley off 7th Street between 9th Avenue and 10th Avenue.

While beginning to form a perimeter, a visibly upset resident advised that someone had run through her house from the back door asking for help. Officers searched the home and found Badillo hiding in a closet.

He was then taken back into custody and turned over to the Border Patrol agent. In addition to his deportation status, the officer forwarded a copy of his report to prosecutors for review and possible charging of escape in the first degree and criminal trespassing. 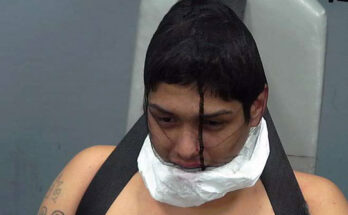