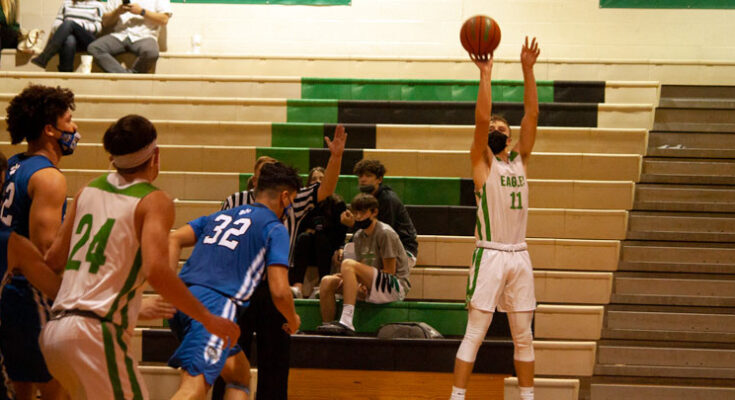 THATCHER – The Thatcher Eagles got its first home victory and region victory by defeating the Safford Bulldogs, 65-54 on Tuesday night. Both teams are in the 3A South Central Region.

Thatcher first-year head coach Kyle Hull expressed his pleasure with the win over the rival school after the game.

“I think they just got tired of losing,” he said. “We all did. Things were a little bit cleaner, but we’ve got a long road (ahead) to clean up a lot. We’re all new at it. I think we’ve got the tools, we just need to sharpen them . . . I’m just happy to get out of the ‘L’ column.”

“Thatcher did better tonight,” she said. “We just gotta come together better as a team . . . We’ve gotta box out on our end. We have to be ready to take a shot when the ball is in our hand – all five players who are on the floor.”

Safford’s Jejdrique Chavez came out hot in the opening period and had as many points (10) as the entire Thatcher team late into the period. Chavez finished with a game-high 23 points.

The Bulldogs enjoyed a 13-10 lead until the Eagles closed out the period on a 9-0 run with buckets by Bradley Curtis, Brandon Napier, and Michael Greer to lead 19-13 after the first period.

“We have a couple of threats on our team,” Camarena said. “Other teams notice, so they shut that down and we just gotta develop the other players to be scorers as well.”

Both teams were competitive in the second period, with Safford keeping it close in the first half. However, Thatcher went on an 11-5 run for the second half of the period to go into the locker room up 36-25 at the break.

In the third period, Thatcher started feeding its 6’8” sophomore center Curtis, who obliged by scoring 8 points in the period and included an emphatic breakaway dunk that brought his teammates to their feet.

“He’s huge,” Hull said when asked how Curtis fits into their game plan. “We like to get him the ball because he draws a lot of attention and that opens up the kick-outs. But, for sure, he can attack the basket and he’s really smooth around the basket. He can finish better than anybody.”

The Bulldogs didn’t roll over, however, and Safford mounted a comeback in the fourth period to get within 7 points, 59-52, with about three minutes left in the game. Safford was aided by a tenacious defense and two big offensive charging calls against Thatcher.

The Eagles would have none of it, however, and after a big bucket by Curtis – who finished with a team-high 20 for the game – the Eagles ran out the clock and held onto the win, 65-54.