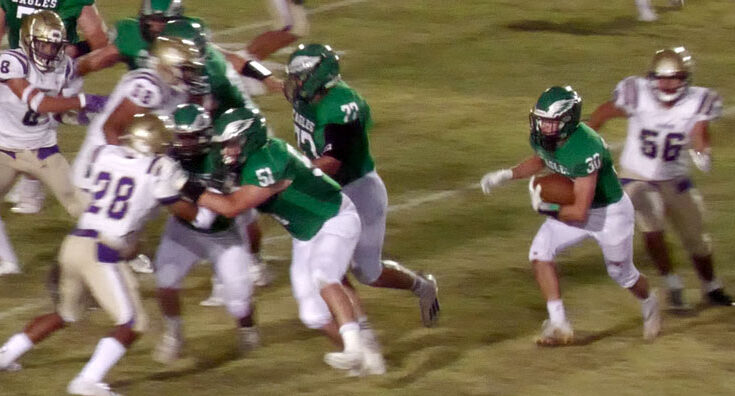 Thatcher – The game of the week was in Thatcher on Friday where the Eagles took on the Tucson Sabino Sabercats to see who would be at the top of the 3A South in a tough regional matchup between powerhouse teams.

The story of the game was the inability of Sabino to stop the Thatcher offense, which owned the line of scrimmage and scored every time they had the ball except for one turnover on downs in the third quarter or when time expired going into halftime or the end of play.

Joshua Mangum led the Eagles in rushing with 121 yards on 21 carries, including one touchdown as Thatcher amassed a total of 429 rushing yards on the night.

Conversely, the Eagles’ defense forced four Sabercats’ punts and got a turnover on an interception in the fourth quarter by Slade Shupe.

The Eagles opened up by scoring on five straight possessions (not counting going into halftime) en route to a resounding 45-28 victory over the Sabercats.

“It was a great game,” said Thatcher head coach Dan Jones. “They are more athletic than we are by quite a bit and our job was just to contain that. We knew we had a bit of size on them, so wanted to try to impose our will upfront.”

Impose their will they did as Thatcher’s offensive line blew out Sabino’s defensive line all night, allowing the Eagles running backs to get a full head of steam before contact on most plays as Thatcher methodically ran the ball down the field.

The Eagles also got some big plays by the backs themselves, including when they were backed up on their own 4-yard-line facing a 3rd and 44 after a series of penalties. Cody Jones took the handoff on the reverse and, sprung by a block from quarterback Wyatt Larson, Cody Jones raced down the left sideline until he was caught from behind 63 yards later. Cody finished the night with 103 yards rushing on seven carries.

Joshua Mangum then capped off the initial drive and followed his blockers along the left side for a 21-yard score.

The Eagles scored three times in the second quarter, twice on runs by Bingham; one a 4-yard TD and the second was on 4th and goal from the 5 in which a pileup at the goal line had the officials discussing the play before confirming the touchdown.

“Thatcher did a very good job,” said Sabino head coach Ryan McBrayer. “They ran their stuff. It’s a very good football team. We had some balls not bounce our way.”

“We gotta go regroup back in Tucson. I’m very confident with our team, so we gotta make sure we fix our mistakes and come back ready to go.”

While the Eagles ran the ball and the clock, the Sabercats scored quickly through the air as Cameron Hackworth – who entered the game with the most passing yards in the state so far this year – hit a wide-open Robert Maultsby for a 59-yard TD.

Thatcher’s running game perhaps lulled Sabino’s defense to sleep, however, as Larson hit a wide-open Slade Shupe on a 67-yard pass in which the defender tried to hold Shupe and was also called for pass interference. Larson finished the night 6-12 for 116 yards passing and had seven carries for 40 yards.

The Eagles did have their troubles with extra points having two blocked and missing others and 2-point conversations, but they took a handy 27-7 lead into halftime and never looked back.

The start of the third quarter was worrisome for a bit, however, as it took Sabino less than a minute after halftime to score. After a few passes in a row got the Sabercats to the Eagles’ 31, Hackworth dropped back to pass and then saw a lane and scrambled into the end zone to cut the lead to 27-14.

Thatcher came right back, however, and Napier kept the ball on an option play and reversed his field back to the right, and went 25 yards for the score.

The scoring in the third quarter ended with Hackworth hitting Maultsby on a 14-yard shot to the side of the end zone as Maultsby just got his foot down before going out of bounds. Hackworth finished 15-19 for 231 yards passing and two TDs. He also ran 14 times for 29 yards, which was greatly diminished from multiple sacks by the Thatcher defense.

The teams then traded turnovers as Thatcher was stopped short on downs but then got the ball back on Shupe’s interception.

The Eagles added two more touchdowns in the fourth, including an outstanding screen pass to Bingham. It looked as if Bingham was going to be stopped for a loss, but he dodged a tackle attempt by a Sabino player, who was in an excellent defensive position, and then raced down the right sideline before pumping the brakes at the 10 as Kamden Gambrell was there to meet him. Bingham then quickly shifted into overdrive and Gambrell couldn’t keep up with the change in speed and Bingham dove into the pylon for the score.

“I think I kind of just found my opening,” Bingham said. “I mean, I caught it and there was a guy. I found my opening to the outside and then I cut back and made a good cut to make it to the end zone (and) stuck out right into the pylon.”

Bingham finished the night with 85 yards rushing on 11 carries and had three touchdowns.

“I think we played a great game,” Bingham said. “We came out prepared; we’ve been preparing for it all week . . . Everyone played great.”

Thatcher’s last TD on the night came as Cody Jones followed a convoy of Eagles on a reverse for a 10-yard TD. The Sabercats kept fighting, however, and after a big 37 yard run by Kris Blackman and an unsportsmanlike penalty by Thatcher, Hackworth faked a handoff and scored from 13 yards out.

By then it was all over, however, and the Eagles left the field with their perfect 4-0 record intact with the 45-28 victory.

“Thatcher is one heck of a team, and we’re happy to have played them and, hopefully, we get the privilege to play them again,” McBrayer said.

“We’ve got ALA Gilbert North, Pusch Ridge, and Safford, so the end of the schedule is pretty brutal, but we’re going to try to polish it and be ready for all that,” Dan Jones said.

In other local football action:

In 2A, the Pima Roughriders (2-0 conference, 2-2 overall) defeated the Tucson Santa Rita Eagles 52-0 in a game that was called with 11:35 in the fourth quarter after a Santa Rita player injured his neck. After EMS arrived at the field, the player walked off on his own. The Roughriders will next host the Scottsdale Christian Eagles for their homecoming on Friday, Sept. 24, starting at 7 p.m.

Up the hill in Morenci, the Wildcats blew out the visiting Madison Highland Prep Hawks 72-0. Morenci (3-0 conference, 3-1 overall) will next host the St. Johns Redskins on Friday, Sept. 24, starting at 7 p.m.

The Duncan Wildkats (0-3 region, 1-3 overall) were idle and will next travel to face the Baboquivari Warriors on Friday, Sept. 24, starting at 7 p.m.

This article originally listed Sabino’s quarterback (1) as Devon Waxwood as was listed in the program, however, the quarterback is actually Cameron Hackworth. This article has corrected that error.