THATCHER – Not everyone opens the door when opportunity knocks. An opportunity to improve and get better was too good to pass up for Thatcher boys tennis head coach Chris Cook.

One of eight teams pulled out of its commitment to attend Thatcher’s 2-day tourney, and Cook instead inserted the schools’ junior varsity teams.

“I was just trying to get them some experience,” he said.

Thatcher’s varsity went 5-0 in its own meet, posting 4-0 wins over Douglas, Miami, and Morenci during pool pairings, plus 3-1 over New Mexico Silver during the semifinals and 3-1 over Benson during the championship. Benson downed Morenci 3-1 in the other semifinal.

In the consolation semifinals, Douglas downed Thatcher’ J.V. 3-1 and Safford won a tie-breaker to edge Miami 3-2.

Each team was assured five matches during the meet. The top two teams in each pool were cross paired with each other as were the third and fourth place teams on the second day.

Two singles and two doubles entrants from each team were paired against other teams for each match, and they did not necessarily have to be locked into that format for each pairing.

The unbeaten Eagles won seven duels before finishing as winners of their own 2-day, 8-team tourney on March 23.

The Chris Cook-coached Eagles have seven duels plus a tourney left on their regular season schedule, beginning with Safford March 26, at Duncan March 28, Miami April 3, at Morenci April 4, at Willcox April 9, Pima April 11, and at Benson April 16. 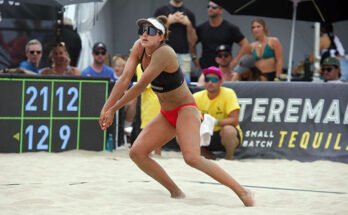 From the desert to the beach: Sarah Sponcil shows off skills at AVP Hermosa Beach Open