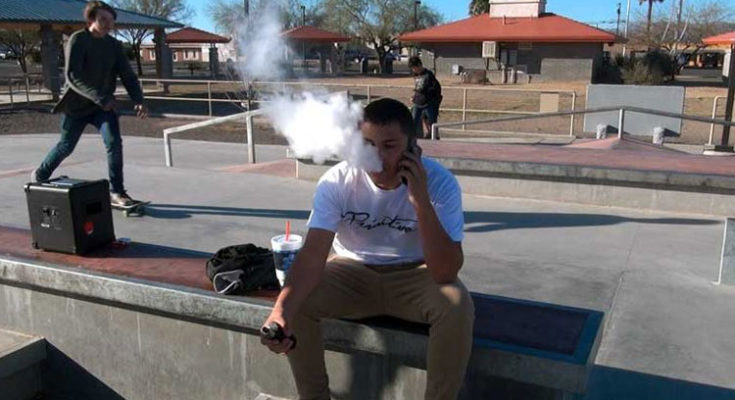 Jon Johnson File Photo/Gila Herald: Carlos Gonzalez vapes while at the Safford Skate Park. School officials and experts say that teens are attracted to e-cigarettes because they do not produce strong odors, the smoke dissipates quickly, and the long-term health effects are unclear. They also say one of the biggest draws is the flavoring, which critics say is aimed toward teens.

WASHINGTON D.C. – With teen use of cigarettes and other tobacco products declining, Arizona health officials say their “No. 1 priority” now is reducing e-cigarette use, or “vaping,” by high school and middle school students in the state.

It comes as the Food and Drug Administration announced recent steps to reduce youth use of e-cigarettes, a problem that FDA Commissioner Scott Gottlieb said, “has reached an epidemic proportion.”

Last year, about 3.6 million high school and middle school students said they had used at least one kind of tobacco product in the previous 30 days, according to the National Youth Tobacco Survey. That was down sharply from 2011 when 4.5 million students in those grade levels reported current tobacco use.

But e-cigarettes were again the most-used tobacco product in 2017, with more than 2.1 million high school and middle school students in the U.S. reporting they had vaped during the year.

“We see clear signs that youth use of electronic cigarettes has reached an epidemic proportion and we must adjust certain aspects of our comprehensive strategy to stem this clear and present danger,” Gottlieb said last month.

Gottlieb said the FDA recognizes that e-cigarettes can help people wean themselves off regular tobacco products, but that the agency cannot “allow a whole new generation to become addicted to nicotine” at the same time.

But Gregory Conley, the president of the American Vaping Association, said the steep reductions in tobacco use overall counter the claim that e-cigarettes are a “gateway” to other tobacco products.

“From 2011 onwards, we saw rapid increases in experimentation with the vaping products, but you saw the largest-ever, record-setting decline in teen smoking in the 40-plus years that the federal government has been collecting data on youth smoking,” Conley said.

“So, what kind of a gateway is vaping where you just had five-, six-, seven-year period of massive experimentation occurring with youth and we saw the largest-ever declines in teen smoking?”

Wayne Tormala, a bureau chief at the Arizona Department of Health Services, said that more-recent state numbers have shown “vape use growing,” and that’s a concern for state officials.

“We’ve put vape as our number one priority because we’ve had great reductions in smoking combustible cigarettes,” Tormala said.

Tormala said a program called STAND – Students Taking a New Direction – that was created about six years ago to address tobacco use has been refocused toward vaping for roughly a year.

“We have like 32 different coalitions in every area of the state, and they are on the ground working with local city councils to get ordinances in, and working with educating each other,” Tormala said.

School officials and experts say e-cigarettes are attractive to students because they do not produce strong odors, the smoke dissipates quickly and studies are unclear about the long-term health effects of vaping. But they say one of the biggest draws is the flavoring, which critics say is aimed toward teens.

“Is it really targeted to youth? I would say yes,” said Jessica Hugdahl, state coordinator of Students Against Destructive Decisions in Arizona. “I don’t know a lot of adults that eat cotton candy, gummy bears and grape soda.

“I’m not saying it doesn’t happen, but clearly it is a product that is targeting youth,” she said.

Vape flavoring was one of the areas targeted, along with labeling, when the FDA sent letters to the five major e-cigarette manufacturers last month, giving them 60 days to come up with a plan for reducing youth sales, or have limits imposed on them by the government. That effort expanded Friday, when the FDA sent letters to an additional 21 e-cigarette companies, questioning the marketing of 40 products.

“I believe certain flavors are one of the principal drivers of the youth appeal of these products,” Gottlieb said when the September letters were filed.

Conley said the industry doesn’t oppose “having a reasonable regulatory situation at the FDA” when it comes to marketing and labeling, but that the “industry and consumers are not going to lay down on flavors.”

But critics say labeling often comes in colors and various designs that appeal to youth. Another issue they see is that e-cigarette use is so easy to conceal.

Hugdahl said some e-cigarettes are so small that “kids can wrap their hands around it, they can hide it and when the teacher’s back is turned they will smoke it.”

“The kids will tell me all the time that they see it in class, in front of the teacher,” she said.

At Cave Creek Unified School District, the parents’ portal on the district’s website includes information on how to identify e-cigarettes.

“One of the vape designs, if you look at it, you would think it was a flash drive, and another one looks like a credit or debit card, so parents wouldn’t be suspicious of anything,” said Gina Durbin, Cave Creek’s director of education and community services.

Conley said “no one actually believes” that an e-cigarette could be disguised as a flash drive, saying it would clearly stand out.

The Scottsdale Unified School District looked to educating parents and students on the dangers of substance abuse and nicotine addiction after an increasing number of students were caught with e-cigarettes. Students can now choose between suspension or attending a six-hour workshop with their parents.

Besides teaching about substance abuse, the workshops also show “parents how to have those conversations, how to set boundaries. Really kind of teaches the students and the parents on how to work together and open those lines of communication,” said Shannon Cronn, clinical services coordinator for Scottsdale schools.