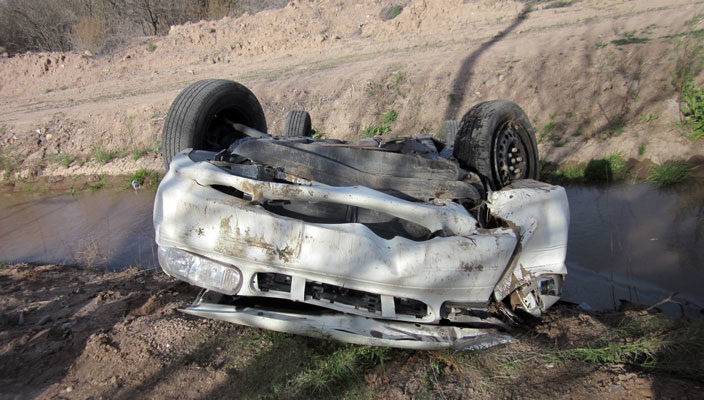 Contributed Photo/Courtesy GCSO: This Buick flipped several times after the driver failed to negotiate a curve in the road. The driver suffered a broken leg and several lacerations and abrasions.

GRAHAM COUNTY – A 16-year-old Safford female is nursing a broken leg, lacerations, and abrasions, but is lucky to be alive after going through a serious single-vehicle crash Wednesday, April 3.

According to a Graham County Sheriff’s Office report, the driver had decided to make a loop through Bryce/Eden Road to kill some time and wasn’t familiar with the area she was driving. She allegedly stated that she was northbound in a white, 2015 Buick Century four-door sedan when she came upon a curve at too quick of to negotiate the turn. The driver did not show any signs of impairment, according to the Sheriff’s Office report.

Additionally, the driver advised that the car’s brakes didn’t feel like they were responsive. Due to the significant damage to the vehicle, the deputy wasn’t able to check the functionality of the brakes. The vehicle was a total loss and had severe damage throughout.

The Buick went off the road to the north and into a canal. It then hit the embankment and flipped over several times before coming to a rest on its top. The driver advised she was not wearing a seatbelt at the time of the crash.

Pima Rescue and Lifeline Ambulance responded to the scene, and the driver was transported to the Mt. Graham Regional Medical Center for treatment of her broken leg and other injuries. The vehicle was towed from the scene by Nutcracker Towing out of Pima.

The investigating deputy reported that the cause of the accident occurred due to the driver traveling at a speed greater than reasonable and prudent to avoid a collision, however, no citation was issued due to not being able to check and see if the brakes were in working order.