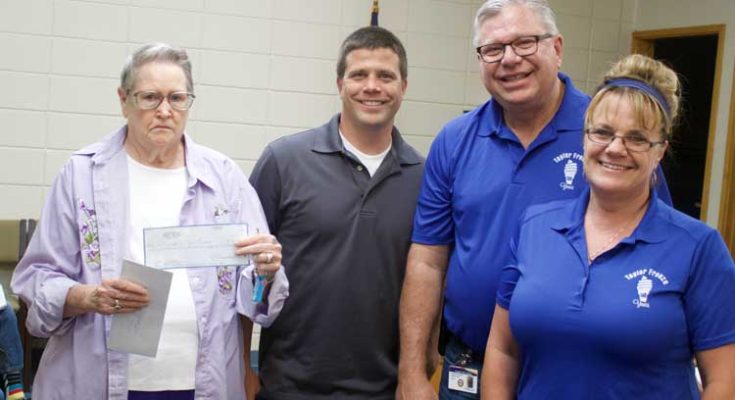 Jon Johnson Photo/Gila Herald: The Eastern Arizona Museum and Historical Society received a check for $1,480 from the Taylor Freeze on Monday, May 1. Pictured are, from left, museum curator Edres Barney, museum board member Clint Woods, and Joe and Sheryl Goodman, owners of Taylor Freeze.

PIMA – Joe and Sheryl Goodman, owners of Taylor Freeze, appeared in front of the Pima Town Council at its May 1 meeting and presented a check for $1,480 to Edres Barney on behalf of the Eastern Arizona Museum and Historical Society.

The money was raised through Taylor Freeze’s handprint signing program it did for its 50th anniversary. The handprints sold for $20 each and purchasers were then allowed to sign the handprint, most putting their family name.

“There is still availability for those who would like their family name immortalized on the wall,” Sheryl said. “We are still collecting money as it comes in, so there will be additional funds to be given to the museum.”

“As a town council, we are really working hard to make Pima one of the really nice, neat little towns in the area,” Fletcher said. “Not only that, we’re trying to make our town a family and you guys really helped doing this project.”

Museum curator Edres Barney thanked the Goodmans for their generosity and expressed her pleasure for the project.

“This is really going to help us do some little projects that are in need and to keep us going,” Barney said.

In conjunction with Pioneer Days, this year being held in Pima, the Eastern Arizona Museum and Historical Society will also be having its 55th anniversary July 24.

The museum is run entirely by volunteers and is open Thursdays through Saturdays from 10 a.m. to 3 p.m.