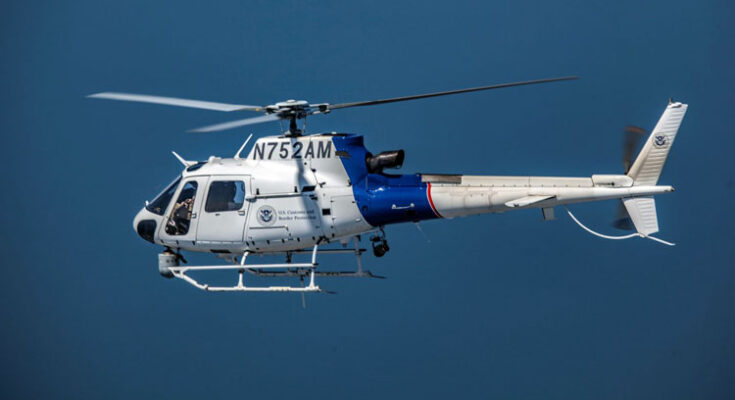 Contributed Photo/Courtesy U.S. Customs and Border Protection: The Helicopter AS350 is a Light Enforcement Helicopter (LEH) is a short-range, turbine-powered helicopter used by Air and  Marine crews to perform missions such as aerial patrol and surveillance of stationary or moving targets.

YUMA – On October 13, 2021, Hector Alvarez was captured by members of the United States Marshals Service Task Force based on a warrant issued for his arrest on charges related to weapons violations.

“The arrest of Hector Alvarez is another example of federal and local law enforcement agencies working together, and leveraging resources, to get a dangerous person into custody,” said United States Marshal David Gonzales. “Our partnership with Customs and Border Protection and other law enforcement agencies assure our ability to safely arrest these dangerous fugitives.”

In November of 2019, Hector Alvarez was contacted by the Yuma Police Department. During that investigation, Alvarez was found to be concealing narcotics and a loaded handgun and was ultimately convicted of attempted misconduct involving weapons. Alvarez served jail time as a result of this conviction and was eventually granted probation. On September 20, 2021, a warrant was issued after Alverez failed to comply with the conditions of his probation. Local law enforcement attempted to arrest Alvarez on this warrant, but he was able to escape, driving out of the area at a high rate of speed, ignoring posted traffic signals, and recklessly endangering other motorists.

After an extensive investigation, the U.S. Marshals Service Task Force, with the assistance of the DPS Arizona State Gang Task Force, Yuma Police K9 Unit, and CBP Air and Marine Operations (AMO), located Alvarez at Brookhurst Apartments in Yuma, AZ. CBP AMO aircrews were able to locate Alvarez and covertly follow him to a residence he was known to frequent. The aircraft was paramount in its contribution to officer safety as it allowed the Task Force members the ability to safely survey Alvarez and the ability to select the safest location possible to serve the arrest. Task Force members approached the apartment and Alvarez was arrested and booked into the Yuma County jail without incident.

The Arizona WANTED Violent Offender Task Force is a U.S. Marshals Service-led multi-jurisdictional fugitive apprehension unit responsible for more than 1,748 arrests in the last year. The task force is comprised of 22 agencies bringing together the resources of federal, state, and local law enforcement to locate and arrest the community’s most violent offenders and sexual predators. Additional information about the U.S. Marshals Service can be found at: www.usmarshals.gov.

AMO safeguards our nation by anticipating and confronting security threats through aviation and maritime law enforcement expertise, innovative capabilities, and partnerships at the border and beyond. With approximately 1,800 federal agents and mission support personnel, 240 aircraft, and 300 marine vessels operating throughout the United States, Puerto Rico, and U.S. Virgin Islands, AMO serves as the nation’s experts in airborne and maritime law enforcement.