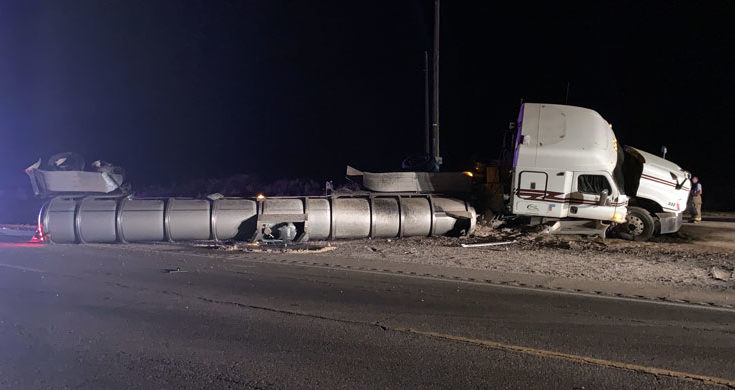 Contributed Photo/Courtesy DPS: Crews spent the evening cleaning up a sulfuric acid spill on U.S. Highway 70 near Pima after a tanker truck was struck by a SUV heading in the opposite direction.

PIMA – A HAZMAT team worked through the night to clean up a sulfuric acid spill that occurred when a semi-truck tanker was struck on U.S. Highway 70 just west of Pima late Wednesday night.

The collision occurred at about 11:30 p.m. near milepost 327, which is one mile west of the Glenbar Gin. It is roughly in the same location where three youths lost their lives Feb. 21 when the Eastern Arizona College van they were traveling in rolled while traveling home from a field trip to drag races in Phoenix.

According to a press release from DPS Public Information Officer Bart Graves, a white 2009 Freightliner Cascadia driven by a 24-year-old man from Thatcher, was hauling sulfuric acid eastbound on U.S. Highway 70 when a westbound silver, 1998 Toyota 4-Runner driven by Jeb Schysm, 19, of Fort Thomas, crossed the centerline and collided with the semi-truck.

The collision caused the semi-truck to roll and sulfuric acid began leaking from its side. According to Graves, the majority of the tanker’s load was lost due to the leak.

Graham County Dispatch reported Schysm suffered a compound fracture to his left arm. He was extricated by first responders and taken to a Tucson hospital for treatment.

Emergency crews alternated traffic around the scene after the eastbound lanes opened just after 1 a.m. and the the roadway was fully reopened just before 9 a.m. on Thursday.

The roadway and surrounding areas were treated for the acid, and as of 11 a.m., Thursday, an Arizona Department of Transportation crew was still on scene cleaning up the shoulder of the road.

Along with DPS and ADOT, the Graham County Sheriff’s Office, Pima Police Department, Pima Rescue, and Lifeline Ambulance responded to the scene.