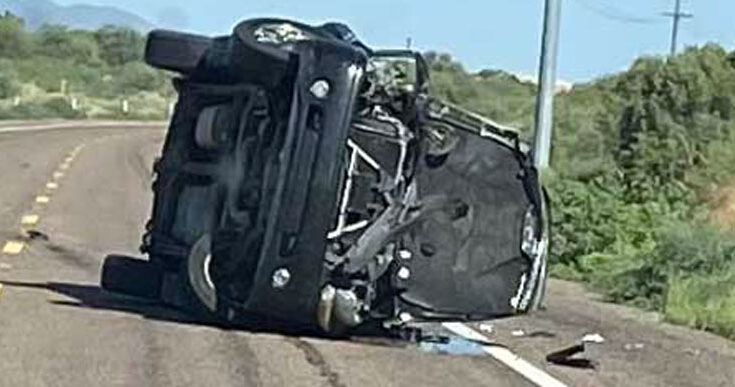 Video still from social media video: This GMC Yukon flipped after striking a tractor on U.S. Highway 70 between Pima and Fort Thomas on Tuesday morning.

GRAHAM COUNTY – First responders were dispatched Tuesday morning at about 8:53 a.m. to the area of milepost 314 on U.S. Highway 70 between Fort Thomas and Pima regarding a two-vehicle collision involving a tractor and a GMC Yukon.

According to Graham County Dispatch notes, the driver of the tractor was initially unresponsive, however, a release from the Arizona Department of Public Safety advised that only minor injuries were reported.

The DPS release advised that the driver of the GMC Yukon struck the rear of the tractor. The driver of the Yukon was given a citation for failure to pass safely on the left.

The Yukon flipped over onto its side and was blocking one lane while the tractor was knocked off onto the shoulder.