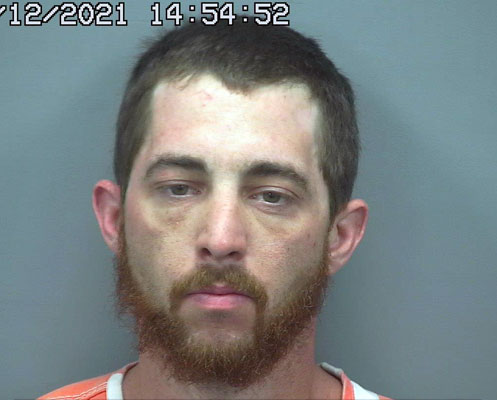 Contributed Photo/Courtesy GCSO: James Errante was booked into jail on multiple charges after fleeing from a deputy on an ATV.

Caught in possession of methamphetamine

GRAHAM COUNTY – A man who claimed to be a Cochise County agent following a load of methamphetamine into Graham County turned out to be hauling a small amount himself. He was pulled over after a deputy saw him operating an ATV on U.S. Highway 70 without taillights or a license plate at about 4:04 a.m. on Monday.

Upon initial contact, the ATV operator, identified as James John Errante, 30, allegedly told the deputy that he was a Cochise County agent who was following a large load of meth that was being smuggled into Safford and that the deputy needed to contact his superiors if he wanted to know what he was doing.

When the deputy advised he would have to remove the ATV from the roadway, Errante hopped on and fled north on U.S. Highway 191.

The deputy followed in pursuit as the ATV went down Discovery Park Boulevard. When Errante turned onto the Safford multiuse trail next to the cemetery, the deputy was advised to withdraw the pursuit.

The deputy then turned off his lights and sirens and met with other law enforcement in the area. Shortly afterward, the ATV was located out of gas roughly 100 yards north of Discovery Park Boulevard and west of 8th Avenue.

An inventory of the ATV yielded a Smith&Wesson M&P-15 rifle, magazines for the rifle, and a large amount of 9mm ammunition. A wallet with Errante’s driver’s license and an inmate identification card from the Arizona Department of Corrections, Rehabilitation, and Release was also found.

After the deputy dropped off the seized items at the Sheriff’s Office, he was advised that another deputy had located Errante on Discovery Park Boulevard just east of 20th Avenue.

Upon arrival, the deputy positively identified Errante, who denied operating the ATV or fleeing from police. Instead, Errante said he was running from a mountain lion when he was apprehended. Errante also denied knowledge of the rifle or ammunition.

A search of a tan pack in Errante’s possession also yielded a Zip-Lock baggie with crystal methamphetamine.

Errante was transported to the Graham County Adult Detention Facility and booked on charges of false reporting, impersonating a police officer, unlawful flight from pursuing law enforcement, possession of a dangerous drug, and possession of drug paraphernalia.