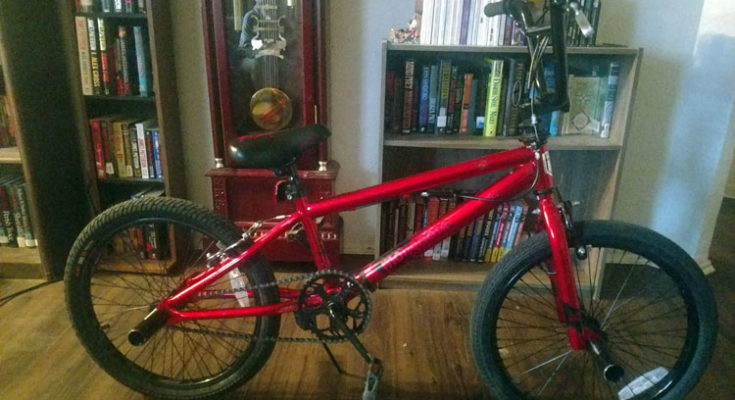 Contributed Photo: This red Mongoose bicycle was fixed and returned to the victim after it was located in pieces.

SAFFORD – A child’s elation from receiving a bicycle on Christmas from his family turned to devastation after an early morning theft, but through community action and police work, the bicycle was returned whole and joy was returned to the innocent youth.

Conversely, the young man who has been led astray and caused the heartache has been jailed.

Daniel Gonzales, 21, was arrested Wednesday, Feb. 20, and interrogated regarding the theft of a bicycle and a separate theft of a black Cadillac Escalade.

An officer was initially dispatched at about 7:30 p.m. on Monday, Feb. 18, to a residence in the 1100 block of 9th Place regarding a man who had attempted to steal a red Mongoose BMX bicycle worth about $150 from the victim’s front porch. The suspect, later identified as Dominguez, ran away from the scene when confronted by the homeowner, but later returned in the early morning hours with a bolt cutter to free the bicycle from a bike cable lock. The victims had set up a camera in their window and captured the thief stealing the bike. The video is below and as of Tuesday morning has been seen nearly 33,000 times.

The victims called the officer back to their residence at about 1:40 a.m. and said they were alerted to the theft by their dog but the thief had already gotten away. The victims advised the officers of the video

Community members identified Gonzales as the thief and officers matched a previous booking photo of him to the video for a positive confirmation. Officers also learned that Gonzales had an active warrant for trespassing but they were not able to locate him at that time.

That same morning, officers were dispatched at about 9 a.m. to the Budget Inn at 1215 W. Thatcher Blvd. regarding a report of a black Cadillac Escalade being stolen from the parking lot.

The victim in the vehicle theft said he had parked it the previous night at about 5:30 p.m. and had the only key for the SUV in the area. Surveillance footage showed a male walk toward the Escalade before exiting the frame. The Escalade is then seen on surveillance footage at 8:53 p.m. back up and then head east on U.S. Highway 70.

On Wednesday, a Thatcher officer located the stolen SUV in the 3400 block of Fourth Street in Thatcher and Gonzales was found hiding in the backyard of the residence.

Gonzales denied stealing the SUV but allegedly admitted to taking the bicycle and giving it to a friend for letting him stay the night since he is homeless. Gonzales then informed officers where they could find the bike and he was booked into the Graham County Adult Detention Facility on his warrant with pending charges including burglary, criminal trespass and theft.

Upon arrival at the residence they were directed to by Gonzales, officers located the bicycle in pieces. The resident advised he had purchased the bike from Gonzales for $20 and said he didn’t realize it was stolen.

According to the victim’s family, Cycle Path at 726 S. 6th Ave. in Safford replaced the missing parts and rebuilt the bicycle, while an “anonymous good Samaritan” paid for the rebuild.

The victim’s father told the Gila Herald that he is “so thankful for this community. With the drug problems and stuff in this town, it’s easy to forget that it’s still a great town full of great people (who) are willing to help out.”