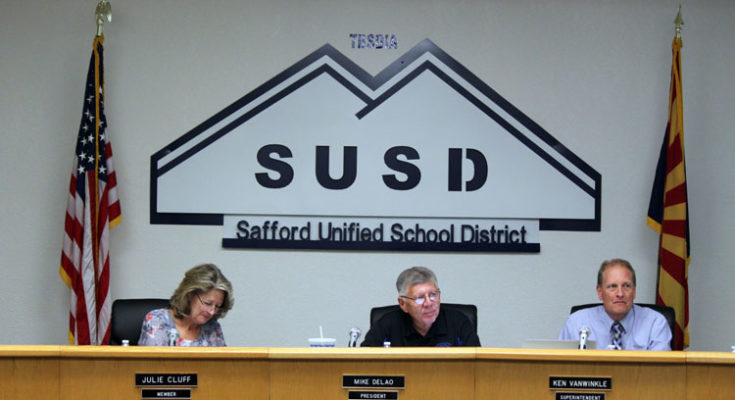 Board encourages expanding the program to surrounding municipalities and more

SAFFORD – Life can be hard at times – especially for youth – but just a small thing such as an encouraging word can make all the difference in the world.

The Safford School District Governing Board is exploring starting a program that involves the placement of uplifting signs throughout neighborhoods, municipal vehicles, and more in an effort to create a positive environment.

“It’s going to hit every child in this Valley – Thatcher, Pima, Fort Thomas, Solomon – all those kids have the same problem as everybody else but they hide it,” Safford School District Governing Board President Mike DeLaO said. “To see these signs on buses, around people’s homes, through the town, on the marquees in town everywhere, it would be a breath of fresh air to these kids to see that we do love them and we do care for them.”

The item was first brought to the board by member Shirley Turner-Chaplin and was discussed at its Thursday night meeting. Ms. Turner-Chaplin was absent from the meeting due to illness, but Superintendent Ken VanWinkle expressed the district’s desire in implementing a program modeled after the “Don’t Give Up Signs” program that was started by an Oregon family in May 2017 and is now a nonprofit organization that sells the promotional items at cost. That program began with placing 20 yard signs with positive messages and now ships signs to all 50 states, 26 countries and in six languages. Read more about the program by visiting dontgiveupsigns.com.

“We feel like it is something we want to bring here,” VanWinkle said. “We had our tragedies in 2017 and before. (In) 2017 is when we had our community meeting – for those (who) remember – to bring everybody together as a community and talk about some of the destructive decisions some of our youth were making. I’ll just come out and say it the suicides that happened and other things that went on, and so we feel that if there is anything that we can continue to do to help our kids realize how important they are and a life is so much more important than just ending it.”

“Man, if we can make this citywide or even through all our communities, wouldn’t that be great? Can you imagine driving neighborhoods and seeing 10 or so of these in every neighborhood?”

After showing the promotional video, VanWinkle encouraged the community leaders from the Safford City Council to join the movement and spread the word to other communities as well. High-achieving students and members of the board spoke to the Gila Herald afterward and expressed their desire to see such a program succeed.

“To me, love is really important, and some people don’t have it and I think everybody should have it,” said Safford Middle School eighth-grader Kaleb Cordova.

“I feel like I’ve had a lot of close friends who do feel like they are worthless and they’re not enough,” said Safford Middles School eighth-grader Kendall Crum. “It breaks my heart to know that and it feels like I can’t really help all the time.”

Safford City Councilors Arnold Lopez and Michael Andazola Sr. were in attendance and expressed their support for the program and envisioned the positive saying being placed on municipal vehicles such as garbage trucks as well.

“If it just helps one person, it’s all worth it,” SUSD Board Member Diane Junion said.

SUSD Board Member Craig Hackett said he believed that the signs could get a conversation started in the home where it is needed most.

“I think if positive messages are out there in the community that the kids will bring it home and maybe that will start a conversation at home and that’s what’s talked about instead of the negative things that happened during the day.”

VanWinkle said the board will now move forward with looking at implementing the program with possibly utilizing local vendors to create the positive signs. Lopez and Andazola reported they would take the issue to the Safford City Council to see what the city could do as well to join the program.