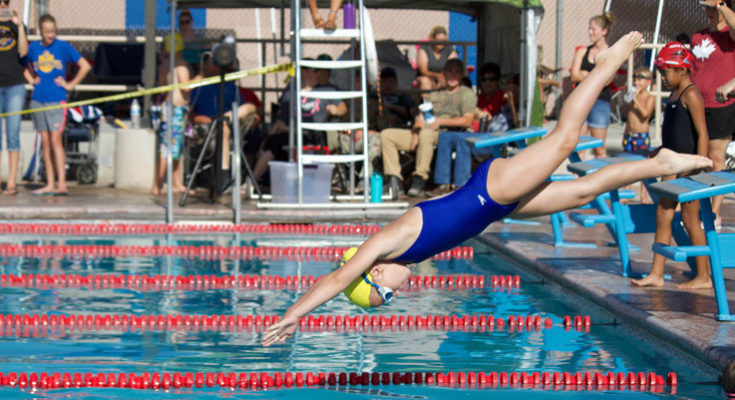 Jon Johnson Photo/Gila Herald: Ambrosia Johnson, 8, dives in to swim the butterfly leg for Pima in the team medley relay. The Pima team took first place in the event.

For three-and-a-half hours, the top eight swimmers in each bracket battled for medals, ribbons, and bragging rights for the next year. Top three finishers in each individual event received medals – gold for first, silver for second, and bronze for third, while other placers received ribbons. Team races, including the medley and free relays, were awarded ribbons as well.

“It was a great finish,” Safford Swim Coach Jacob Stiles-Culver said. “It was a great season. There were a couple of bumps along the way – especially today – but it was a lot of fun. I love being able to have this with my first year and I look forward to coming back.”

Pima had the most swimmers qualify for finals and packed the heats with yellow caps.

“I was happy with our swim season and final meet,” Pima Head Coach Natalie Schlittenhardt said. “Pima was represented well. If you watched warmups, our lanes were pretty packed! Swimmers performed really well and many swam events back-to-back since there was only one heat per race. Overall, I was pleased.”

Marlo Day, 15, swimming for the Morenci Manta Rays was the Gila Herald’s choice for outstanding swimmer of the meet. Marlo received a gold medal for finishing first in every single individual event (six golds) and received two first-place ribbons in the team events (medley and free relays) while competing against the boys’ teams on a mixed team for Morenci.

“Swimming is awesome,” Marlo said. “I love the sport. It was a really fun season and I loved watching the improvement of our team and the other teams as well.”

Marlo said her favorite part of the summer swim season was the culmination of all the hard work at swim finals.

“It’s the last one and you can see all the progress,” she said. “It’s really rewarding.”

The Day family could be seeing this type of result for a while as Marlo’s younger sister, Eliza Day, rocked the 9-10 girls division with six golds of her own for first place in each individual event.

Other notable swimmers at the event included Pima’s Ambrosia Johnson, 13, who scored two gold, two silver, and two bronze medals in the girls 13-14 division; Thatcher’s Joseph Bull (11-12 boys); and Morenci’s Elijah Leyba (13-14 boys). (Note: Some of Morenci’s top swimmers were not at the community swim team finals due to swimming in a Junior Olympics meet the same weekend. To qualify for that meet, swimmers had to have equaled or bettered the Arizona Junior Olympics qualifying time standard.)

Saturday’s event officially started at 8 a.m. but the pool doors opened at 6:45 a.m. and the seasoned swim team folks arrived early and put up shade structures. Popular shaded areas also featured mister systems and small, inflatable baby pools to help keep the young and elderly cool as temperatures quickly rose to triple digits. Thankfully, the meet progressed quickly and by 11:30 a.m. the last race had swum and the pool was cleared.

The only ones who didn’t have any respite from the heat were the sun-blasted volunteer timers, without whom the meet couldn’t have been held. The Gila Herald would like to recognize those who volunteer their time to assist in the meets, along with all the coaches and others who make the summer swim season possible.

“There were a few glitches we’ll need to address for next year, but it’s a great event for local swimmers to showcase their skills and improvements,” Schlittenhardt said.

Stiles-Culver also thanked his swimmers for their diligence throughout the season.

“I couldn’t be more proud of them,” he said. “They worked really hard over the season and learned a lot. They seemed to have a lot of fun and I love them. I’m super proud of them.”

To view a photo album from the meet click here.

This article was updated at 7:10 p.m. to include comment from Pima Head Swim Coach Natalie Schlittenhardt.