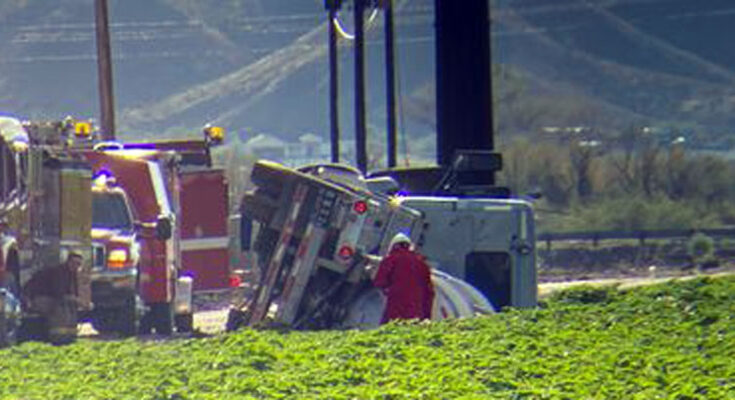 Contributed Photo By Chelsie Stewart Candela: A worker examines the rolled-over semi-truck. No sulfuric acid reportedly spilled in the crash.

According to Graham County Dispatch notes, the rollover occurred in the area of Norton Road and Reay Lane. The Sheriff’s Office was contacted about the crash at about 3:33 a.m.

Semi-trucks often loaded with sulphuric acid frequently utilize Norton Road – which has a residential neighborhood – as a bit of a shortcut from their trip from the Miami, Arizona area east to the Safford site. Truckers advise the turn onto Norton Road from Highway 70 is an easier one to make, however, there is a traffic light at the intersection of Highway 70 and Reay Lane and not one at the Norton Road intersection.

The crash is still under investigation by the Sheriff’s Office, but preliminary notes from County Dispatch advised that no sulfuric acid leaked. However, diesel fuel from the truck is believed to have leaked onto a cotton farm where the truck landed. The Thatcher Fire Department also responded to the scene.

The road was closed for a time period as a heavy wrecker and crane uprighted the truck and towed it from the area. The roadway was then cleared by 10:06 a.m.