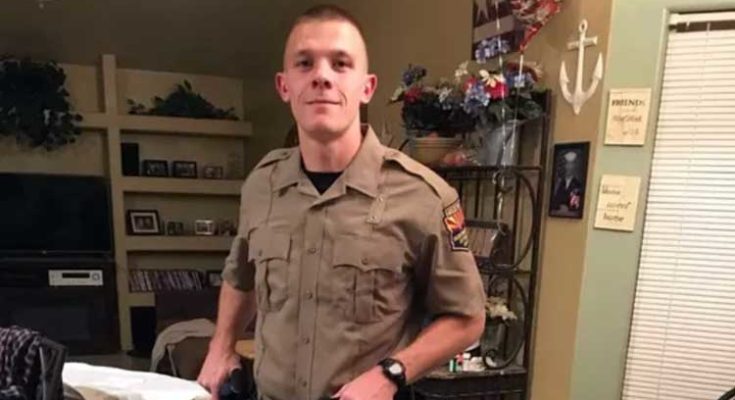 Arizona Department of Public Safety Trooper Tyler Edenhofer was shot and killed Wednesday while responding to a call on Interstate-10 near Phoenix.

AVONDALE – An Arizona Department of Public Safety (DPS) trooper was shot and killed Wednesday after responding to a 911 call at 10:17 p.m. regarding a male suspect throwing rocks at vehicles that were eastbound on Interstate-10 near Avondale Boulevard.

According to a press release from the DPS, three troopers, Dalin Dorris, Sean Rodecap, and Tyler Edenhofer arrived at the scene and attempted to take the suspect into custody. A fight ensued and two Goodyear Police officers also arrived to help with the suspect.

During the fight, the male suspect managed to gain control of one of the trooper’s firearm and shot twice, striking Dorris in the shoulder and mortally wounding Edenhofer.

Trooper Rodecap also sustained injuries during the fight. He and Dorris were transported to a nearby hospital, where they were treated and released.

The male suspect was taken into custody and was treated at a valley hospital as well. No further information was released, but a press conference was scheduled for Thursday, starting at 3 p.m.

A U.S. Navy veteran, Trooper Endenhofer was hired in September 2017 and graduated from the Advanced Trooper Academy on May 4.

“I’m incredibly proud of the men and women that show up every day to do this job and that they are brave enough to come out and face the unknown,” DPS Director Frank Milstead said.