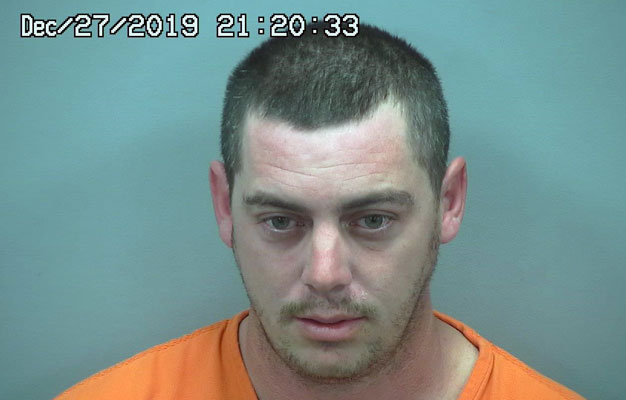 Contributed Photo/Courtesy GCSO: Nicky Ray Hogue, 25, was booked into the Graham County Adult Detention Facility after fleeing from an officer while allegedly driving while intoxicated.

Driver already on probation for previous DUI and flight from DPS

PIMA – Nicky Ray Hogue, 25, of Central, was arrested and booked into the Graham County Adult Detention Facility on Dec. 27 on charges of DUI, aggravated DUI, unlawful flight from law enforcement, and reckless driving.

The arrest came after a Pima Police officer reportedly observed a Dodge pickup truck southbound on Cluff Ranch Road at 72 mph in a posted 50 mph-zone.

The truck, later learned to be driven by Hogue, refused to yield to the officer’s emergency lights and siren and instead drove quickly through a wash and endangered other nearby vehicles.

At one point, the truck lost a taillight after striking a berm off the side of the road but continued.

Hogue eventually pulled over and he and his passenger, identified as Jason Hillyard, 42, of Phoenix, were taken into custody at gunpoint. The officer later learned that neither Hogue or Hillyard had a valid driver’s license. A search of the vehicle yielded empty and full bottles of beer.

After initially implying Hillyard was the driver, Hogue admitted to driving and that he had been drinking alcohol. Hogue, who is currently on probation from a previous DUI, said he just decided to keep going even though he realized the police were attempting to pull him over for speeding. Hillyard was issued a citation for an open container of alcohol in a vehicle and was given a ride home.

A sample of blood was obtained from Hogue and will be sent to the Arizona Department of Public Safety laboratory in Tucson for testing purposes. In 2016, Hogue also fled from law enforcement while drunk and was found guilty of that charge, as well as DUI and attempted aggravated assault with a deadly weapon. He was given a prison sentence and was released in September 2017.

Hogue was booked into the Graham County Adult Detention Facility, where his breath/alcohol concentration was listed at .101 from a portable breath test.