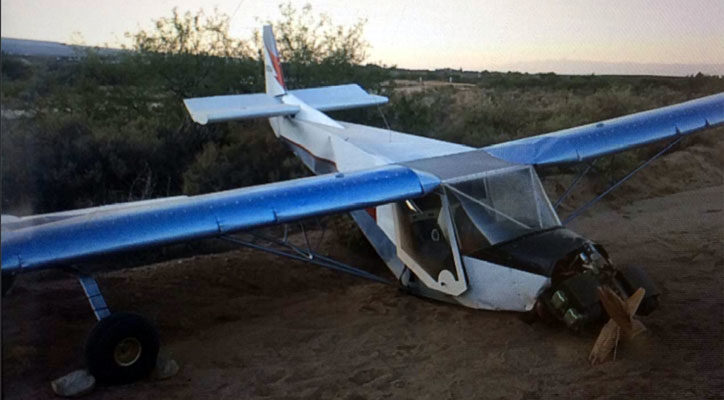 Contributed Photo/Courtesy GCSO: This single-propeller airplane crash-landed in a wash south of Safford on Saturday after being struck by a bird.

ARTESIA – A small, single-propellor airplane crash-landed in a wash east of Stockton Road just north of Antelope Lane on Saturday after a bird struck the propellor.

A Graham County Sheriff’s Office deputy was dispatched to the crash site at about 4:54 p.m. and came upon two men standing near the downed plane, which was sitting in a sandy wash.

Operator’s Ronald and Randy White reported they were in the Zenith 701 airplane and had left from the Safford Regional Airport. According to a Sheriff’s Office report, they were at about 1,000 feet roughly 10 miles south of Safford when a bird struck the propellor.

The strike caused the plane to shake uncontrollably and Ronald reported that he had to shut off the engine. He attempted o land on Stockton Road, but was unable to make it and settled for landing in a nearby wash.

The crash landing caused damage to the wings, fuselage, and additional damage to the propellor while shearing the rear landing gear and folding the front landing gear under the plane. However, both brothers walked away from the emergency landing unscathed and did not require medical attention. The plane was valued at about $30,000.

According to the Zenith Aircraft company, that model of plane was developed as an “off-airport” short take-off and landing kit aircraft built to fulfill the needs of both sport pilots and first-time builders. It was first introduced in 1986 and most are operated from short, off-airport grass fields, in backyard fields, and in remote areas.

After a representative of the Federal Aviation Administration (FAA) and National Transportation Safety Board (NTSB) gave approval, the brothers began to dismantle the wings and place them on a flatbed trailer. Deputies stood by until the rest of the airplane was also loaded on a trailer and removed from the scene.