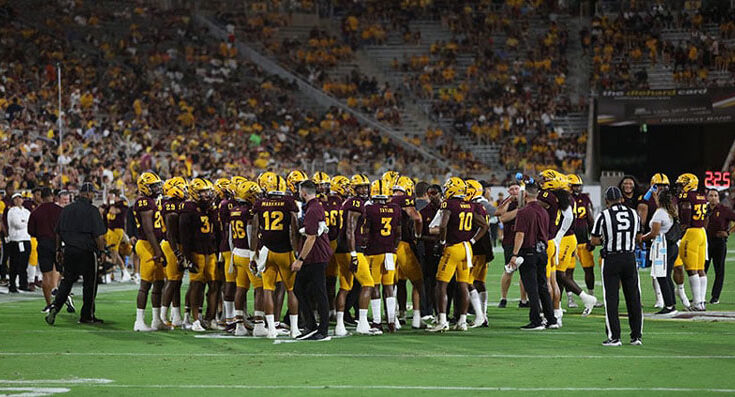 Photo By Rudy Aguano: Despite the team’s struggles, ASU feels it can end the season on a high note with a victory over Arizona.

TEMPE – Following a loss to Oregon State, residents and students in Tempe woke up to a typical but troubling rivalry week scene. Arizona State’s iconic “A” on Hayden Butte was vandalized with red and blue paint, sparking the flame for Friday’s in-state meeting.

The Sun Devils will face Arizona for the 96th time in this Duel in the Desert and will look to bring the Territorial Cup to Tempe for the sixth time in a row. In a disappointing season, ASU interim coach Shaun Aguano is trying everything to motivate his players.

During practice this week, Aguano made sure they knew about that incident on “A” Mountain and even played the Wildcats’ fight song to help energize his players.

“They weren’t happy about it, and that’s good,” Aguano said. “There are a couple of things from an engagement standpoint and motivational standpoint that I like to throw in. But they really need to know that we just need to execute at practice. I’ll throw those little tidbits this week just to keep it interesting.”

Following the Wildcats’ loss to Washington State, Aguano noticed a video circulating on the internet of a scuffle between Arizona quarterback Jayden de Laura and wide receiver Dorian Singer and plans on using the heated exchange to his advantage.

“I also made sure that our kids saw the little scuffle on the sideline and all of those things that we don’t need to do,” Aguano said. “So, anything that I can use from an advantage.”

This season, 43 players are playing in the maroon and gold for the first time. With their various backgrounds, not all 43 can possibly understand the importance of one of the oldest rivalries in college football. Aguano explained to them the “why” behind the storied rivalry to elicit further motivation.

Aguano and the video department made an educational video on the importance of the Territorial Cup and even brought in popular ASU alumni to speak to the team, including Juan Roque, Jean Boyd, and Kevin Minefield.

“I sat back last night before I came in this morning and thought, ‘Do these kids really understand what it is?” Aguano said.

“This is a one-game season right here and this game probably means more to them and the state of Arizona more than anybody really imagines. They talk about the Territorial Cup, but they don’t know the reason why and the history, so we spent about five to six minutes just watching a video of the history of the Territorial Cup so those guys can understand exactly what we’re playing for.”

Although the future for Aguano is uncertain, seniors Kyle Soelle, Merlin Robertson, and Case Hatch will be playing in their final game in an ASU uniform. The trio has yet to lose to the Wildcats and will do everything possible to keep that unbeaten streak for next year’s team.

“One thing I’ll say, it’s personal. It’s personal for sure,” Hatch said, “I haven’t lost to them yet, and so hopefully, we keep that going.”

For junior quarterback Trenton Bourguet, the matchup on Friday afternoon will be an exciting moment. Previously a backup, Bourguet attempted just two passes in the 70-7 victory in 2020.

This time he will walk into his hometown of Marana, about 20 miles outside of Tucson, as a starter.

“I’m definitely looking forward to it,” Bourguet said. “I grew up with that game, and I know how much it means, so I’m excited about it.”

Aguano said his quarterback “is a competitor. I know what it means for him to go down there and win. He will be prepared and ready like always.”

A victory Friday would crown the Sun Devils champions of Arizona and could help in-state recruiting.

“There are a lot of things that you can use in a recruiting speech that you can get, but beating Arizona is huge,” Aguano said. “You want to win the Arizona battle of kids. My goal is to win and keep the best kids and just having that in your speech is something that I think is a huge advantage.”

As the game nears, Aguano understands there is a lot of emotion surrounding the game from both teams. Despite the slew of changes the 2022 Sun Devils have faced this season, Aguano hopes his players can put the emotion aside and play for the love of the game.

With all the team has gone through, the Sun Devil brotherhood is expected to be as strong as ever this Friday afternoon.

“For 100-something years, this game has been played, so just to be on the sidelines with my football team is a huge feather in my cap,” Agunao said. “Just an honor for me to represent Arizona State, and coming away with that win would be a huge honor, too.”

Kickoff is set for 1 p.m. Friday at Arizona Stadium in Tucson.