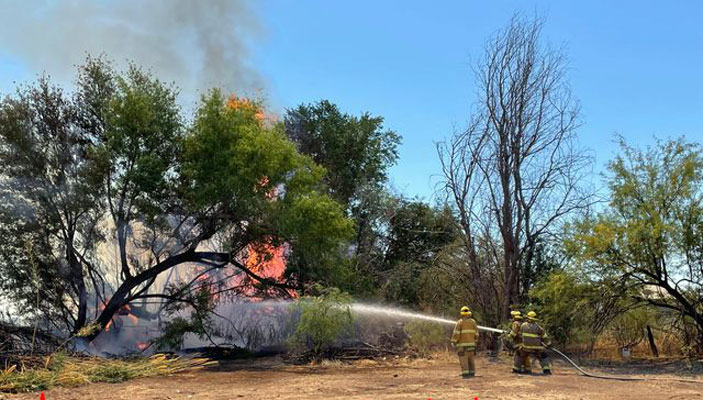 Contributed Photo/Courtesy Michael Peterson: Safford firefighters knock down a brush fire that erupted along the Union Canal along 1st Avenue in Safford on Friday.

SAFFORD – The volunteer Safford Fire Department (SFD) responded quickly and in numbers to a brush fire along the Union Canal in the 10000 block of First Avenue (U.S. Highway 191) north of 11th Street on Friday.

The fire caused the closure of S. 1st Avenue between W 11th Street and W. Relation Street for about 90 minutes Friday morning.

The quick action helped the firefighters keep the blaze to a single area. No structures were damaged and no injuries were reported.

According to Safford Fire Chief Clark Bingham, the SFD was dispatched to the scene at about 10:24 a.m. and was on scene until about 1 p.m. Three trucks responded to the brush fire.

“There was some bamboo and trees and brush along the canal that was on fire,” Bingham said. He advised the bamboo was extremely flammable and burned quickly and easily.

Bingham advised the fire was apparently human-caused, however, there is no information regarding who started it or why. While canal workers commonly burn brush to clear the waterways, officials with the Irrigation District were quick to inform they did not have any burning going on in the area Friday.

With wildfire season upon us, the Safford Fire Department advises against residential burning, but if you do so it recommends: