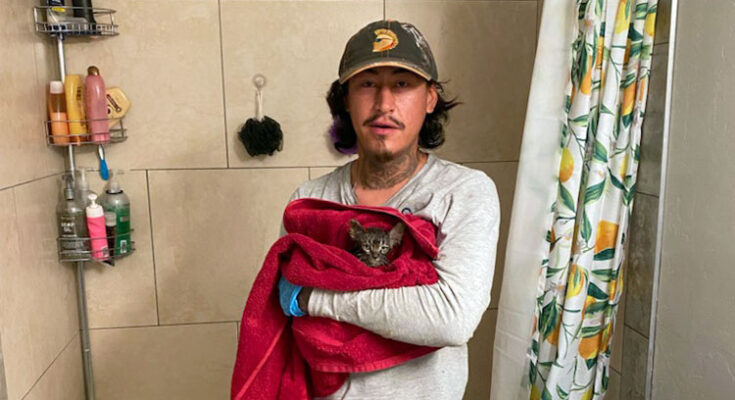 Contributed Photo: Christopher Archuleta with 3G Plumbing holds a kitten he helped rescue out of a residential sewer pipe. Archuleta adopted the kitten and took him home.

SAFFORD – We’ve all heard of firefighters rescuing cats from trees. But a feline rescue Friday night was a little bit different.

The Safford Fire Department and 3G Plumbing and Services joined forces to save the life of a kitten that had gotten stuck in a residential sewer pipe.

The fire department was dispatched at about 7 p.m. to a residence in the 1100 block of 7th Avenue after residents believed they had a cat in the wall.

Residents attempted to locate the kitten, which was wailing, for 11 hours and enlisted the help of the Desert Cat Rescue & Sanctuary. After still not being able to find the feline, the fire department was called.

“We determined it couldn’t have been in the wall,” said Safford firefighter John Archuleta. “So, we got on the roof and we could hear it in the vent pipe.”

John Archuleta said they then called 3G Plumbing – which his son, Christopher Archuleta works for – to see if they could help with the situation.

According to John Archuleta, the kitten had fallen in a clean-out pipe that wasn’t capped. Clean-outs are areas where plumbers and others can easily get into sewer and septic tank pipes, usually to snake them clean of debris.

“It had been in there quite a while,” John Archuleta said.

The plumbers with 3G Plumbing inserted a camera down the drainpipe and saw the lost kitty.

Residents, plumbers, firefighters, and more then began to dig the area around the sewer pipe. The plan was to cut the pipe and coax the kitten out, however, the plumbers noticed on their camera that the kitten had moved.

So, the toilet was removed in the residence and the plumbers nudged the kitten forward with their camera. After more than four hours, the camera nudge and vision of light were enough, and the rescuers managed to free the kitten, who was then adopted by 3G Plumbing’s Christopher Archuleta.

“I really like to thank 3G Plumbing,” John Archuleta said. “They didn’t have to do what they did. We do what we do, but that’s something we don’t have the resources for. They came and volunteered their time and equipment to help.”