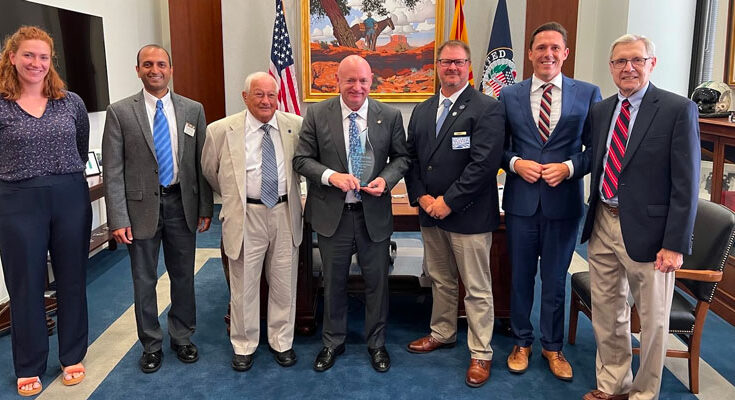 WASHINGTON D.C. – On Tuesday, Arizona Senator Mark Kelly (D) was named the Groundwater Protector of the Year, an honor given by the National Ground Water Association (NGWA) each year to one member of Congress who goes above and beyond in the protection of and advocacy for groundwater. Kelly is the first Arizona member of Congress to receive the award.

“As we face a historic drought, our work to secure Arizona’s water future is more important than ever. I’m grateful to National Ground Water Association for their shared commitment to this priority. I’ll keep working in the Senate to ensure Arizona communities have the water resources they need to grow and prosper,” said Senator Kelly.

“Few leaders have done more to secure Arizona’s water future than Senator Kelly. He has been a tireless advocate in combating the PFAS contamination in groundwater and fighting for more investment in aquifer recharge projects. Senator Kelly’s work this year to address water challenges is unparalleled and it’s a great honor to be naming him as our Groundwater Protector of The Year,” said Terry S. Morse, CAE & CEO of the National Ground Water Association and Groundwater Foundation.

Kelly serves on both the United States Committees on Energy and Natural Resources and Environment and Public Works where he has advanced legislation to combat western drought, upgrade our nation’s water infrastructure, and defend Arizona’s water rights.