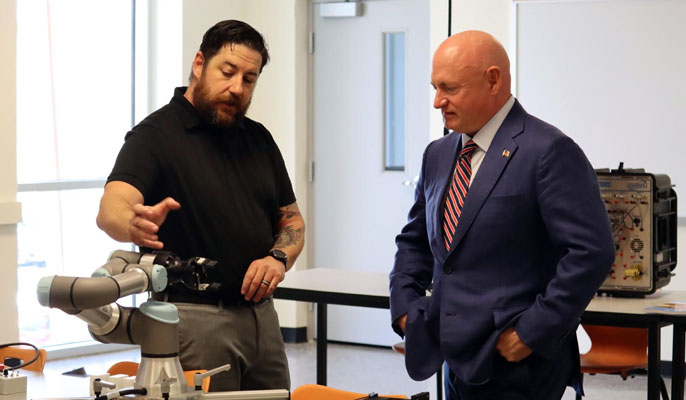 Contributed Photo: Tim Wilson, a manufacturing instructor at EMCC, shows Kelly a robotic arm in one of the EMCC classrooms.

PHOENIX – On Tuesday, Arizona Senator Mark Kelly returned to the Phoenix area to highlight his work to create more microchip manufacturing jobs for Arizonans. Kelly visited the Estrella Mountain Community College (EMCC) West-MEC campus, where he toured their manufacturing laboratories and learned more about their program that teaches students the skills needed to fill these high-paying jobs without a four-year degree.

During the visit, Kelly participated in a briefing with EMCC board members, deans, and instructors on how the College’s new Quick Start program, in partnership with companies like TSMC and Intel, will prepare students for the high-paying semiconductor jobs that are coming to the Valley thanks to Kelly’s $52 billion plan to boost American microchip manufacturing and research.

In April, Kelly was named to the bipartisan conference committee tasked with finalizing landmark microchip and innovation legislation Kelly has championed and pushed forward in Congress for over a year. Kelly recently penned an opinion column on how his legislation will create thousands of high-paying jobs in Arizona, strengthen supply chains, lower costs, and reduce the United States’ reliance on foreign countries for this technology critical to our national defense and economic security.