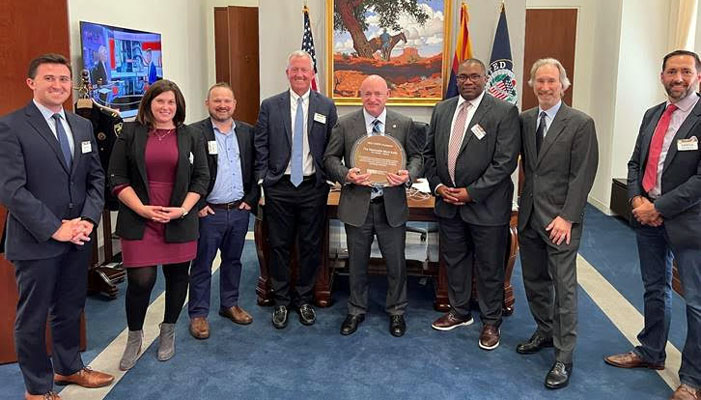 WASHINGTON – Arizona Senator Mark Kelly received the “CHIPS Champion” award yesterday from the Semiconductor Industry Association (SIA) in his Washington, DC office. The award recognizes Kelly for his leadership role as a chief negotiator of the landmark CHIPS Act of 2022, which will grow Arizona’s microchip manufacturing industry, lower costs, and create tens of thousands of high-paying jobs in the state, many of which will not require a four-year degree.

“We greatly appreciate the leadership of Senator Kelly in helping to enact the historic CHIPS and Science Act, which will boost U.S.-based production and innovation of semiconductors that are critical to America’s economy, national security, and supply chains. We’re pleased to present Sen. Kelly with SIA’s CHIPS Champion Award as a token of our appreciation and look forward to continuing to work with him to strengthen U.S. semiconductor research, design, and manufacturing,” said Semiconductor Industry Association President and CEO John Neuffer.

“When I was sworn in to serve in the United States Senate, I said I’d work with Republicans and Democrats to not just rebuild Arizona’s economy but to reinvent it for the future. I’m glad to say our CHIPS law will do just that. Thanks to our work, we’ll create thousands of high-paying jobs in Arizona, many of which will not require a four-year degree, lower costs, and a more competitive economy for generations to come. I appreciate SIA’s recognition of our efforts to get this done,” said Senator Kelly, a chief negotiator of the CHIPS Act of 2022.

Arizona is home to one of the largest microchip industries in the country and is poised to grow with investment plans from Intel and the Taiwan Semiconductor Manufacturing Company. Kelly recently welcomed U.S. Commerce Secretary Gina Raimondo to the Phoenix area to highlight how his CHIPS law will help Arizonans get the skills needed to fill these high-paying microchip manufacturing jobs as a result of Kelly’s law.