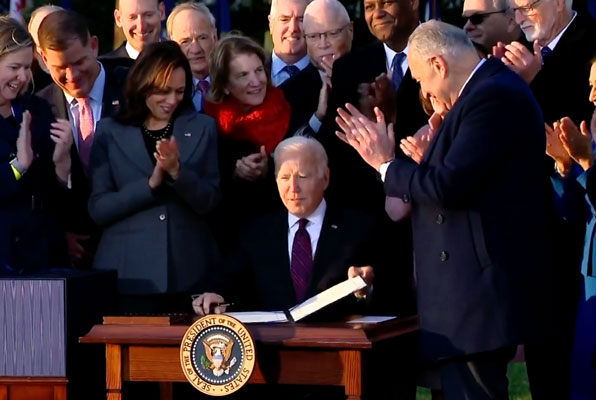 “Today’s signing of the bipartisan infrastructure bill signifies a huge opportunity for Arizona. This legislation is a big boost for Arizona’s transit and roads and will modernize our ports of entry, improve our aging water infrastructure, and bring much-needed internet connectivity to our rural and tribal communities. Most importantly, this bill is going to bring high-paying jobs to our state and ensure that it remains the best place to live, work and grow,” said Senator Kelly.

Kelly is one of the members of the Senate bipartisan group that negotiated and shaped the $1.2 trillion infrastructure bill and was part of working groups made up of Senators to draft specific portions of the legislation, including those focusing on water and power infrastructure, super funds, and brownfields, permitting, and wildfire mitigation.

In total, the bill funds:

·         $110 billion to repair bridges and roads and build major highway projects, including unsafe rural roads, $5 billion is expected to go to Arizona for federal-aid highway apportioned programs and $225 million for bridge replacement and repair;

·          $55 billion for drinking and wastewater infrastructure, with key funding for Arizona programs and projects;

·          $8.3 billion for western water infrastructure, with specific funds going towards repairing aging dams in Arizona and funding the Drought Contingency Plan, among other things;

·          $65 billion to improve grid reliability and resiliency and allow for the increased use of renewables, as well as a Kelly-authored bill to expand the use of energy management initiatives;

·         $8.25 billion for wildfire management, including increasing firefighter pay and a Kelly-authored bill to study and recommend wildland fire prevention, suppression, management, and rehabilitation policies; and

In addition, the following pieces of legislation sponsored or cosponsored by Senator Kelly are included in the bill: The Demand-Response Management Act of 2021; The Wildland Fire Mitigation and Management Commission Act; The ROCKS Act; The Fixing Infrastructure Damaged by Disasters Act; The High-Risk Rural Road Safety Act; and The Highway Cost Allocation Study Act of 2021, added via amendment.

For a full breakdown of the Infrastructure Investment and Jobs Act and Senator Kelly’s work on it, click here.