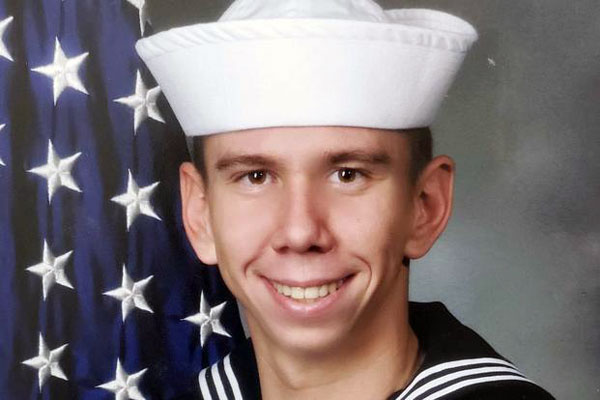 Photo courtesy of the Caserta family: Aircrew Aviation Electrician’s Mate Striker Brandon Caserta, 21 died by suicide on June 25, 2018. An investigation found that leadership at Helicopter Sea Combat Squadron 28 in Norfolk, Virginia, “contributed” to his decision to take his own life.

“For months, I worked with Republicans and Democrats to get the language of the Brandon Act in the defense bill. Today, our hard work has paid off. Thanks to the tireless advocacy of Teri and Patrick Caserta, and bipartisan support in Congress, our efforts will help us confront military suicide head-on and save the lives of other young servicemembers,” said Senator Mark Kelly.

“America’s service members shouldn’t have to settle for a broken system that’s incapable of providing them with the mental health support they need, and today’s vote means they no longer have to. This bill is an important piece of Brandon’s legacy—one that will save the lives of so many great American heroes. I’m proud of his parents for fighting to make sure that families of other service members never have to share their experience, and I look forward to continuing to do this work alongside them,” said Representative Seth Moulton, the bill’s author.

“We cannot be happier that The Brandon Act is in the NDAA. Words cannot express the gratitude we have for Rep. Seth Moulton, Sen. Mark Kelly, and their entire staff for tirelessly advocating for our military service members and for the guidance and support they gave Patrick and me through the entire complicated NDAA process,” said Teri and Patrick Caserta, parents of Brandon Caserta. “The Brandon Act will save military servicemember’s lives and it will give them the mental health care they rightfully deserve without retaliation. We would also like to thank Senator Mark Kelly and his staff, all of the cosponsors who support The Brandon Act, LULAC, NAMI, the American Foundation for Suicide Prevention, and all of the organizations who supported us and The Brandon Act. The tragic and untimely death of Brandon Caserta brought awareness to the suicide rates in our military.  We cannot bring Brandon back, but The Brandon Act will honor our son in the way he would want. This is a military service member victory!”

Brandon Caserta died by suicide on June 25, 2018, on the flight line at Naval Station Norfolk, Virginia. After his death, his parents and friends discovered six notes in which Brandon attributed his suicide to persistent hazing and bullying from some members and leaders of his Navy helicopter squadron. The Brandon Act expands the existing law that regulates how service members are referred for mental health evaluations, in order to provide a confidential channel for service members to self-report mental health issues. The process would protect the confidentiality of service members, similar to the restricted reporting option that protects victims of sexual assault.

The National Suicide Prevention Lifeline provides 24/7, free and confidential support for people in distress, prevention and crisis resources for you or your loved ones, and best practices for professionals. Find more information about the Lifeline at suicidepreventionlifeline.org or call directly by dialing (800) 273-8255.