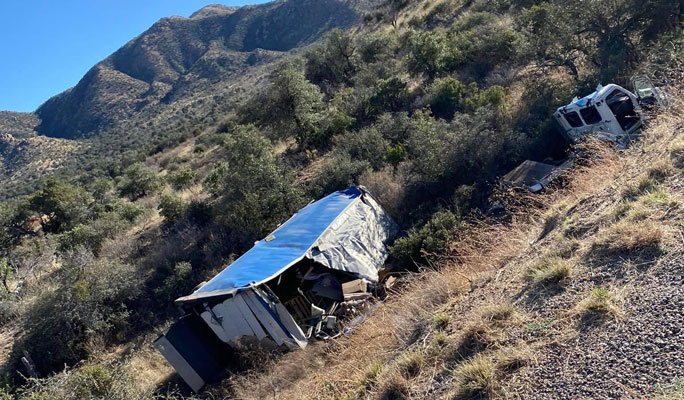 Photo By Joni Kennedy: A tractor-trailer is at rest on the side of a ravine after rolling off Highway 266 on Friday. The driver was hospitalized with non-life-threatening injuries, and the crash closed the highway for several hours.

GRAHAM COUNTY – U.S. Highway 266 was closed for more than eight hours on Friday, March 4, after a tractor-trailer rig carrying boxes rolled down a 20-foot ravine.

The driver was taken to a local hospital with non-life-threatening injuries.

The incident occurred during the same time Interstate-10 was closed due to blowing dust and freeway traffic was diverted to U.S. Highway 191 North and U.S. Highway 70. However, the incident did not appear to be related.

According to the Arizona Department of Public Safety, the crash occurred near milepost 114 at about 1:33 p.m. The cab separated from the trailer during the roll down the ravine, and it took several hours for crews to pull the tractor-trailer from the ditch.