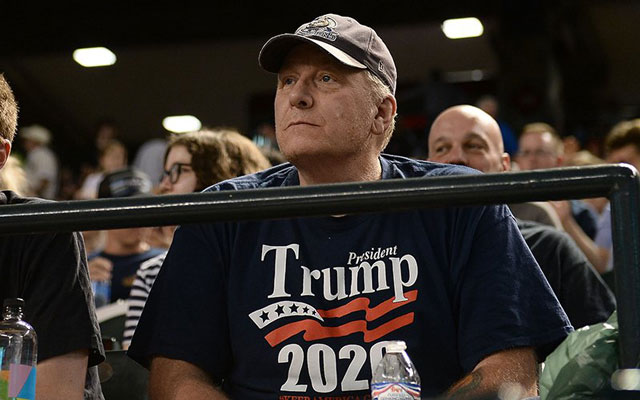 Photo By Jennifer Stewart/Getty Images via Cronkite News: The divisive personality of former Arizona Diamondbacks pitcher Curt Schilling appears to have kept him out of Baseball’s Hall of Fame again.

PHOENIX – The stats are almost undeniable.

And yet, Schilling, a product of Shadow Mountain High School, failed to make the Baseball Hall of Fame for the ninth consecutive year Tuesday by 16 votes, in a ballot that inducted nobody for the first time since 2013 and the ninth time in 77 years.

For four years in the early 2000s, Schilling was a top-five pitcher in baseball, with three Cy Young runner-ups to show for it. He would have been the ace on two different World Series teams if fellow all-time greats Randy Johnson and Pedro Martinez didn’t exist. Baseball Reference’s Hall of Fame Monitor – a lengthy, complicated algorithm programmed to determine whether a player is worthy of a selection or not – gives Schilling a score of 171, dousing its baseline score of 100, which signifies whether a player is a “likely Hall of Famer.”

But ever since 2013, the late January day when the Hall reveals its inductees has been a fateful one for Schilling. On the heels of words some called racist and sexist, and his support of seditious actions since President Trump’s presidential campaign in 2015, the former Arizona Diamondback right-hander has faced a battle getting into baseball’s cathedral. On Tuesday, it continued.

Schilling, 54, said in a statement released on Facebook that he requests to be left off the ballot next year, in what would be his last shot to get in unless the Hall of Fames Eras Committee, which meets every few years to consider players not voted in by the Baseball Writers Association of America, decides to induct him at a later time. The former pitcher also said he would have liked to be inducted as a Diamondbacks player if he had made the cut.

Schilling had perhaps his best chance yet. He gained 71.1% of the ballot, short of the 75% needed and a fall from where The 2021 Baseball Hall of Fame Tracker, run by Ryan Thibodaux, had him early in the day. But Thibodaux’s tracker only represented less than half the ballots, and the others – those not made public – were Schilling’s downfall.

One voter who did not have Schilling on his 2021 ballot was Mark Faller, the director of sports at the Arizona Republic.

“I have not voted for him since 2016 because of – and I’ll call it what it is – his hate speech against many groups across the spectrum over and over and over again,” he said on “Arizona Horizon” on Arizona PBS Monday night.

MLB and the Hall of Fame have said nothing regarding Schilling’s and Omar Vizquel’s candidacy, the latter who was accused of domestic violence by his wife in a piece by The Athletic and gained 49.1% of the vote Tuesday.

“The character clause has been in the Hall of Fame voting instructions for many many years,” he said. “A lot of people don’t realize that it’s been in for decades now. It’s only been focused on the last 10-15 years. There’s always been precedent that a voter can consider off-field issues. But again, it’s something that hasn’t been used much and has not been part of the discussion until recently.”

Pomrenke said a lack of clarification from MLB and the Hall of Fame has brought about the discussion and controversy seen recently with Schilling and other perennial All-Stars such as Barry Bonds and Roger Clemens, who either used or were accused of using performance-enhancing drugs.

“Certainly both MLB and the Hall of Fame could come out and clarify the issue for voters, and I think that’s one of the reasons why this whole discussion has become as complicated as it has,” Pomrenke said. “The Hall of Fame kind of leaves it up to individual voters when it comes to who is worthy of induction.”

“I believe (the Hall) would like to focus only on the player’s career,” he said.

Pedro Gomez, one of ESPN’s top MLB reporters, does not see either of the things Pomrenke mentioned happening. With a majority of voters favoring Schilling’s induction, he said things should remain how they are.

Gomez was adamant that the Hall of Fame will not take any further action beyond the character clause Pomrenke mentioned, and won’t pressure those in the BBWAA to change anything as well.

“They do not take a stand one way or another,” he said. “I don’t foresee them doing that at all. They’re going to let the voters decide on their own.”

That leaves Schilling stuck in the middle.

If the voting body does come together and set greater standards, it could result in things trending south for the former pitcher. According to longtime baseball writer Jon Heyman, Schilling’s support of the violent mob that breached the Capitol Building in Washington D.C. on Jan. 6 caused one voter to ask for their ballot to be revised following the attack. The revision of the ballot, which was not allowed by the Hall of Fame, would have likely resulted in Schilling’s name being removed from it.

“It’s not an easy one, and a lot of it has been self-inflicted on his part,” Gomez said of Schilling.

Pomrenke said the BBWAA has made a push for more clarity before, but that it hasn’t been impactful enough.

“The writers would like to see more of that,” he said.

“There is the argument that if Baseball and the Hall of Fame won’t do it themselves, then perhaps the writers are going to have to get together as a group and come to a collective decision because I think the way it’s being handled right now where every individual voter has to figure it out for themselves is clearly not a positive thing.”

Count Faller in as agreeing.

“People have to be held accountable for what they say and do,” he said.